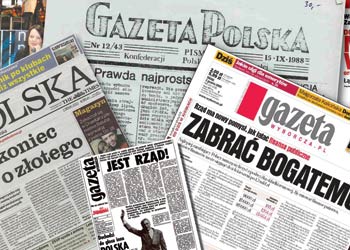 This year marks the 20th anniversary of independent private media in Poland, which developed after the fall of communism in 1989. After that year, the position of the Polish media changed radically – papers could serve their readers rather than the authorities, and deal in information rather than in propaganda. Until 1989, the Main Office for the Control of the Press, Publications, and Public Performances (GUKPIW) was responsible for ensuring the propriety of media transmissions. By this time, the media system had been centralised and subordinated to one party. With the onset of media freedom, new initiatives were initiated spontaneously. According to the amended press law, anyone could become a publisher. The changes in the political system ensured unlimited access to press, radio and television.

At the beginning of the ’90s a lot of new, independent radio stations appeared on the Polish scene. Those that managed to survive despite fierce competition constitute an important element of everyday life for many people. On 15 January 1990, the first Polish private station, Radio Małopolska Fun, now called RMF FM, was established by Stanislaw Tyczynski. Soon, other stations were put on the air. After the fall of the People’s Republic of Poland it was essential to have a submitted and approved radio frequency in order to broadcast. The only institution that did not require permission was the Catholic Church, a discrepancy that later allowed priest Tadeusz Rydzyk to build a media empire.

It was enough to have an old transmitter to set up a radio station, which cost as much as a worn-out Maluch car. The first transmissions of RMF FM were in French, later in Polish. In June, Radio Solidarność, famous for its illegal programme broadcast during martial law, began its legal activity. Soon, another private broadcaster, Andrzej Woyciechowski, launched Radio Zet in the capital.

Both RMF FM and Radio Zet (sometimes called “Zetka”) broadcast programmes live and focus on the issues that interest a younger audience. Zetka was famous for an excellent, dynamic information service including talks with politicians. Woyciechowski ensured that radio was independent, ambitious and worked towards building democracy.

Tyczyński, Woyciechowski and Father Rydzyk offered the kinds of programmes that public media did not have and tried to be as close as possible to their listeners. The high point of RMF FM was the “Invasion of Power” – original musical events organised throughout the country and broadcast over the radio. Zetka copied the idea, while Father Rydzyk started to organise weekly meetings with the Family of Radio Maryja in different parishes. The merit of private broadcasting was to force public radio to abandon the status quo and to take greater interest in their listeners’ needs.

The sphere of private television has also developed since the beginning of the ’90s. As in the case of radio stations, almost all television broadcasters were low-cost local stations created by enthusiasts. In 1990 in Wrocław, the first Echo Private Television was set up and it was soon followed by other stations in Poland, which created a nationwide network called Polonia 1, developed by Italian press magnate Nicolo Granso in cooperation with Silvio Berlusconi. In the meantime, satellite TV began to appear. TV Polonia – the station designed for Polish viewers residing abroad – began to broadcast and succeeded in creating its own information service called “Informacja”.

In 1993 ATV – National Cable Television – was established and numerous cable television stations broadcast its programmes. Until 1994 almost all of the stations were broadcasting without the necessary permits, which had not been issued. When concessions started to be mandatory, the fate of particular stations was a foregone conclusion. Polsat managed to get a license, but Polonia 1 lost out and began to broadcast from Italy via satellite, and was soon sold to a new owner.

In 1996 the broadcasters of popular Western cable channels, which included Eurosport, Planete and Discovery, began to broadcast in Poland. The following year was a turning point, when TVN – the second-ranked independent national network after Polsat – was established. 1998 marked the onset of satellite digital platforms when 10 new channels, including National Geographic, Cartoon Network and Romatica, were made available in their Polish language versions.

Following the creation of three digital platforms, one could observe the appearance of new channels like Atomic TV (the Polish version of MTV) on the Polish market. 2001 marked two important events: the beginning of TV Puls, which had a “family” character, and TVN24, the first Polish information network, which soon had to face the challenge of reporting the attacks of 11 September. The next year saw a merger of two of the most influential operators, Cyfra+ and Wizja TV. At present, the Polish television market is gaining momentum, consisting of over 100 channels, of which themed channels are the most numerous.

The new political system also meant more freedom for the printed press. Due to the changes of 1989, a high volume of independent newspapers such as Gazeta Wyborcza and Tygodnik Solidarność (“Solidarity Weekly”) appeared. In 1990, new legal regulations concerning the published press were enacted, and censorship was abolished. The market could decide the fate of new titles. Some were eliminated, others handed to cooperatives of journalists. New editorial teams began to publish Rzeczpospolita, Życie Warszawy, Express Wieczorny, and Trybuna. The use of new graphic layouts, better paper and colour, and modern printing techniques made Polish newspapers more attractive and competitive in relation to Western titles. After 1989, paid advertisements became the main source of revenue for newspapers and magazines. Although the number of titles has been increasing, circulation has fallen due to economic factors and competition from television, the Internet and the emergence of a free urban press.

In comparison to other post-communist countries, Poland had the most experience in creating independent media under dictatorships and their development during the democratic changes. Independent sources of information played an integral role in the fall of communism in the Soviet Bloc. Independent media have an important role to fulfil in the promotion of democracy and the free market, and must therefore transmit objective information and carefully explain political and economic processes. Unfortunately, in some post-Soviet countries the private media remains weak and there is a lack of the necessary political climate for the development of the free press.

In Poland, a large sector of the private media is currently functioning. They compete with one another, which is conducive to the development of objective journalism. The Polish media is characterised by professional journalism and management, technical preparation and distribution, the existence of regulations protecting the freedom of information as well as organizations protecting journalists. For all of these things, Polish experience can be utilised in other post-Soviet countries.