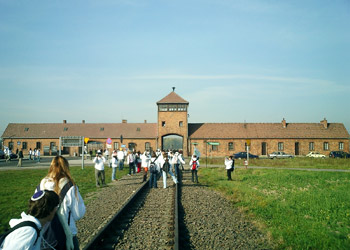 Poland has many image problems, but by far the most infuriating is its Siamese-twin-like association with the Holocaust. Poland’s experience was apocalyptic and, unfortunately, there is something in human nature that finds apocalypse fascinating. This is a major headache for Poles: do you preserve the rusting remnants of apocalypse, giving them that sickly sexy gloss of terror tourism, or do you bulldoze them like the pitiful products of simple-mindedness they were and leave nowhere for the survivors to grieve or the youngsters to learn?

The fact that Auschwitz, Birkenau and the others still stand is an act of Polish national bravery that is rarely acknowledged. How many countries would have the guts to preserve the instruments of an invader that had undone it so barbarically? Who could bear to keep the knife that had killed their child? It looks easy to an outsider: these places should be kept as a lesson for the world; but if it was in your back garden, contained the ashes of your family and a billion people wanted to see it, how would that make you feel?

And that isn’t even the worst part, because some of the people who want to see it are into it: they grew up with the sexiness of apocalypse and wish they had been there. It’s the PlayStation game that would sell a billion copies, but can never be made.

I haven’t commented on the Arbeit Macht Frei sign theft before because it was a petty theft made irresistible to the media just because of its Holocaust connection. Somewhere out there are people revelling in the whole thing and, beyond reporting the theft as local news, it’s unwise to feed them oxygen. I only bring it up now because there was a story this month that blew the silly shenanigans of these Neo-Nazi ditzes out of the water. I mean, of course, the video of Holocaust survivor Adolek Kohn and his thousand-year-defying offspring dancing in the remains of concentration camps (watch the video if you don’t know what I’m talking about). As far as I can see, this video is the final solution for neo-Nazism. Any neo-Nazis who continue to be neo-Nazis after seeing this are probably too dumb to urinate unaided, let alone constitute a threat to civilisation.

Some people have described the video as “controversial,” which is just media-speak for: “It’s about the Holocaust, so we have to look ‘sensitive’.” Kohn and Co. have given the lie to this approach. If a Holocaust survivor wants to dance to “I Will Survive” outside the gates of Auschwitz, he should be provided with a complementary 12,000-piece band and jewel-encrusted dancing shoes. No more scary stories about “psychopaths” with guns and gas canisters — they just make impressionable young men horny. I want these people to look like the simpletons they were, and humour is the only sure-fire way to do it.

Just because the world needs more neo-Nazi jokes, and because you were kind enough to read this far, here’s the answer:

All of them: one to change the bulb, and the rest to whinge about a Jewish light bulb conspiracy.

2 thoughts on “Perspectives on Poland”