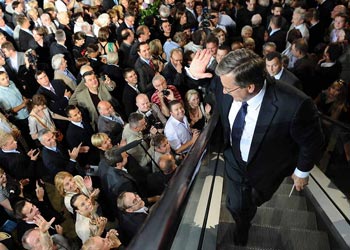 What makes for good government? Many things, but a good opposition helps. An unelectable opposition is liable to make the best of governments complacent.

So July’s presidential election, and the preceding campaign, gave grounds for optimism. The leader of the opposition Law and Justice (PiS) party, Jarosław Kaczyński, may have been defeated by Bronisław Komorowski of the governing Civic Platform (PO). Yet he not only managed to force a run-off – something that appeared far from obvious just a couple of months earlier – but lost by a narrow margin of 47:53. And he gained more votes than his twin brother, Lech Kaczyński, when winning the presidency in 2005.

Kaczyński managed this feat by cleverly exploiting sympathy generated by the president’s tragic death in an air crash in April 2010. In the past, his unpopularity with the country’s media made every blunder count for a lot more than would have been the case with his rivals – and he did not help his case, by adopting aggressive language or losing his temper with journalists or opponents. In mourning for his twin brother, however, Kaczyński presented a less convenient target. And he was careful to avoid controversy, courting centrist voters by promoting moderate, technocratic figures to head his campaign and toning down his rhetoric.

To many commentators, Kaczyński’s defeat felt like victory. It is unclear that this indubitably clever, but often awkward man would have enjoyed the position that, besides the prestige and the right to veto government-sponsored bills, involves little influence on domestic policy and a lot of boring diplomatic events. Instead, defeat by a narrow margin, just weeks after opinion polls suggested 20 percentage points and more, meant the momentum had shifted in PiS’s favour and the party was well positioned to regain power in the parliamentary elections scheduled for November 2011. This, as even some prominent PiS figures suggested off the record, was the real objective of Kaczyński’s run.

But immediately after his defeat Kaczyński appeared to abandon the centrist course he had charted during the campaign. Some might see his call for renewed investigation into the “strange” circumstances of his brother’s death as an expression of legitimate concern by a bereaved family member; but to many it looked like pandering to conspiracy theorists who detect a plot by Prime Minister Donald Tusk and Russia’s Vladimir Putin behind the air crash. Spurred on by fiery Catholic monk Tadeusz Rydzyk, whose Radio Maryja enjoys a fanatical, if mostly elderly, following, some of these hard-core fans of the deceased president have kept a round-the-clock vigil at the cross erected after his “martyrdom” outside the Presidential Palace in Warsaw’s Krakowskie Przedmieście. The authorities may have secured the bishops’s agreement to move the crucifix to a church – but its defenders have vowed to spill blood to stop them.

This is off-putting for most voters, and the key to Kaczyński’s success in the presidential campaign was steering clear of such extremists without actually alienating them. So the post-election focus on the disaster prompted even friendly commentators to mutter of political suicide: pandering to the base would permanently deprive PiS of a chance to return to power.

If that is so, does the presidential ballot herald the beginning of unchallenged hegemony by Donald Tusk, the prime minister and leader of the PO? Leave aside the fact his party does not actually hold a majority in parliament and governs in coalition with the Polish People’s Party (PSL) – the rural-based junior partner has little real say over policy. In the recent past, Polish politics saw tectonic shifts in relatively short timeframes – the right-wing coalition that governed in 1997-2001 failed to clear the threshold to win parliament for the following parliamentary term, while the succeeding post-Communist government of the Democratic Left Alliance (SLD) saw its support shrink to barely over 10 percent at the next election. The notion that SLD may yet return to glory now appears slightly more likely than before the presidential ballot: the nearly 14 percent for its leader, Grzegorz Napieralski, beat all expectations. But his ambitions for the next term cannot go beyond the status of a junior partner in a coalition government. That, and PiS’s alleged demise as a serious contender to more than 20-25 percent support, means any challenge to Tusk’s power before 2015 would have to come from within the PO.

Bronisław Komorowski, the president-elect, is the most obvious challenger. The Polish president may not have the power enjoyed by his counterparts in the U.S. or France, but he is no mere figurehead along German lines. Armed with a popular mandate, his influence on foreign policy can be real. Crucially, important nominations are in his hands. There are some signs Komorowski may use this to carve out an independent political position for himself.

As speaker of the Sejm, or the lower chamber of parliament, Komorowski ran while fulfilling the role of acting president. He could have continued in this role after his election and stepped down just before the swearing-in. To the surprise of many, including, as is the word on the street, Prime Minister Tusk, he stepped down almost immediately and recommended that Grzegorz Schetyna replace him as speaker. For several years, Schetyna had been Tusk’s right-hand man, his executor and executioner of former political allies who had become too powerful. Last year, his own time was up: with his name surfacing in the context of a corruption scandal, Schetyna was forced to step down as vice-premier and home minister. For all the denials that his nomination to head the PO’s parliamentary caucus was a demotion, this was clearly a man on his way out of real politics. So Schetyna’s nomination to speaker left Tusk outmanoeuvred for what is probably the first time in his impressive history of political assassinations.

Tusk, Komorowski, Schetyna. The prime minister, the president and the speaker. This triumvirate will govern Poland for the foreseeable future, or so would pundits have you believe. Expect some back-stabbing and an occasional sign of discord, as these three jostle for power. But make no mistake – these are all PO men and their interests converge. There is a good chance Poland’s politics will remain stable until the next parliamentary term ends in the autumn of 2015.