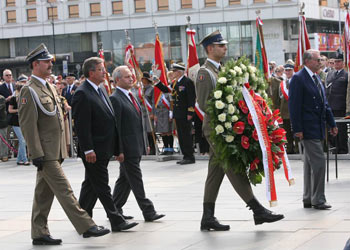 Sixty-six years ago the heroic yet ultimately doomed struggle for freedom from Nazi oppression, the Warsaw Uprising, began. The fighting would continue for 63 days, while just across the Wisła, the Red Army stood still, waiting for the Nazis to eliminate the Polish resistance.

At noon yesterday, President-elect Bronisław Komorowski took part in commemorations at the Tomb of the Unknown Soldier on Piłsudski Square in Warsaw, where he placed a wreath at the memorial. At 5 pm, or “W-hour” when fighting formally broke out on 1 August 1944, sirens wailed throughout the city as the main commemorations took place at the Gloria Victis (“glory to the vanquished”) monument.

At the ceremony, Warsaw Mayor Hanna Gronkiewicz-Waltz told the crowd, “You can destroy a city, and its infrastructure, but you cannot destroy the spirit of its citizens or their longing for freedom and democracy”.

Over 16,000 Polish resistance fighters and between 150,000 and 200,000 civilians were killed during the Warsaw Uprising. The Warsaw Uprising Museum premiered an innovative 3D film this weekend that aims to recreate the scene after the Uprising, when almost 90 percent of the city lay in complete ruins. Over two years in the making and utilising the expertise of 40 historians and computer graphics specialists, the five-minute film depicts how the city would have looked from a plane flying overhead in the spring of 1945.