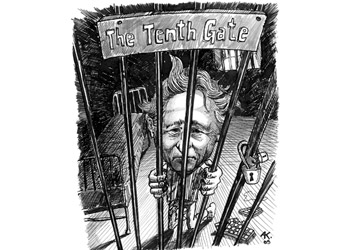 In a video interview on tabloid website Radaronline.com, a woman named Edith Vogelhut has claimed that in 1974, Roman Polanski violently raped her. According to Vogelhut, the alleged crime took place in Jack Nicholson’s house, the same location as the 1977 incident for which Polanski pled guilty for and was arrested in 2009 and then released this month.

According to Radaronline.com, Vogelhut, a former model and editor of Glamor magazine, filed charges against Polanski with the Los Angeles District Attorney in May. In the interview, she described her encounter with Polanski, saying he told her to “Turn over, get on your stomach” and handcuffed her, before allegedly raping her. She was 21 years old at the time of the alleged encounter, and had met Polanski at a dinner party hosted by famed producer Robert Evans.

At one point during the interview, Vogelhut states that Polanski gave her MDMA (the drug commonly known as ecstasy or “E”) before raping her. However, this part of the account is especially suspect, as MDMA did not come into popular use until the early 1980s rave scene, whereas the incident allegedly took place in 1974.

The article on Radaronline.com also states that Vogelhut is planning the release of an autobiography, which includes a chapter about the alleged rape.

This latest accusation follows that of actress Charlotte Lewis from May of this year, who claimed that Polanski had sex with her when she was 16.