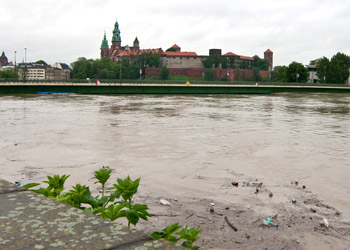 The weather this summer has gone from one extreme to another. Unbearable heat turned to rain almost overnight, leaving some of us shivering like autumn leaves. Some areas of Lesser Poland have been on alert since yesterday. The Dunajec in Sromowacach Wyżnych and Szreniawie in Biskupicach have risen to “alert” levels, other Wisła tributaries like Raba, Skawa and a few others in the Lesser Poland area are expected to rise considerably after the heavy rains that fell overnight. Three anti-flooding alarms and four anti-flooding emergency services have already been issued, and five rivers have passed “alarm” levels while 20 are on “high alert”.

Krakow’s Prokocim neighbourhood began flooding when the Serafa River spilled over its banks during the night. “We received information that Serafa was threatening to spill over as early as 2:00 am and have been working to remedy the situation since we received the news,” the spokesperson for Krakow’s Fire Department told Gazeta Wyborcza.

Other regions of Lesser Poland seem to be in worse situations. The Czarny Dunajec River in Nowy Targ exceeded its “alarm” level by 28 cm and the Lepietnica River in Ludźmierz exceeded its “alert” level by 61 cm. Within the last 24 hours Kasprowy Wierch in Zakopane experienced heavy rains of 60 litres per squared meter, which will further raise water levels in surrounding areas.