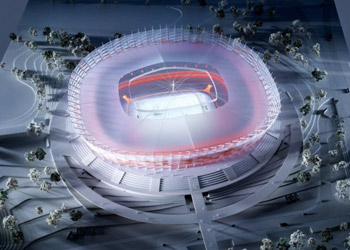 Euro 2012 is two years away, but law enforcements are already working hard at keeping the stadiums safe. The police are monitoring stadium construction around the country, making sure the work areas have not been compromised. But, that is just the beginning.

“There are many areas which will require our attention,” Adam Rapacki, Deputy Minister of Home Affairs, told Gazeta Wyborcza. Airports, public transportation, and places for accommodation will all have to be secured and monitored for suspicious activities. Law enforcements are thinking about closing the border between Poland and the EU, in which case everyone entering Poland would have to pass Border Control. This decision, however, will be made closer to the event after a safety analysis reveals Poland’s security level. Jails will make room for havoc-causing fans. Extra police and ABW (the Internal Security Agency) personnel are being trained to work during the championships.

A new law concerning the safety of participants in mass events will have to be altered for Euro 2012. The act requires, among other things, personalised tickets, which makes identification simple and quick, but UEFA does not keep track of who purchases tickets. Another change to the new act will have to deal with alcohol, which normally cannot be bought on stadium premises. UEFA requires all VIP areas to be stocked with alcohol. These are some of the secondary issues that organisers will have to deal with, but the primary issue will be, of course, safety.

Close to a million foreign visitors are expected to come to Poland for Euro 2012, which calls for careful planning, flawless organisation, and smooth execution on the part of law enforcement agencies.