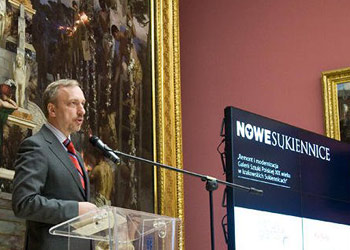 Minister of Culture Bogdan Zdrojewski was in Krakow on 24 July to sign the Act of Renewal of the National Museum in the Cloth Hall. The ceremony marked the end of a four-year renovation of the building, the jewel in the crown being the Gallery of 19th Century Polish Art.

“Krakow is the most important place on Poland’s cultural map,” the minister declared, “and in this way, the Cloth Hall represents the very heart of the heart”.

The much-loved building, which bestrides the Main Market Square, endures as a vivid symbol of the power of Krakow’s merchants during Medieval and Renaissance times.

A gallery of Polish art was initially opened on the upper floors in 1884, following a radical remodelling of the edifice. The current renewal has cost 23.5 million złoty, about half of which was paid by the Polish state, the other half coming from a generous bequest from Norway Grants.

Besides a thorough renovation of the museum’s four exhibition halls, in part restoring the original 19th century character of the gallery, over 1,000 square metres of new space has been created. Amongst the attractions is the “Multiteka”, a hi-tech educational space equipped with interactive information points. Meanwhile, epicures are sure to be delighted by the cafe on the roof, which boasts one of the finest views in the city.

“I am very proud to have reached this moment,” said Zofia Golubiew, director of the National Museum in Krakow. “It was a dream that I had had for many years, and the renewal shows that sometimes dreams really can be fulfilled.”

The Gallery of 19th Century Art in the Cloth Hall is set to open to the public in early September.