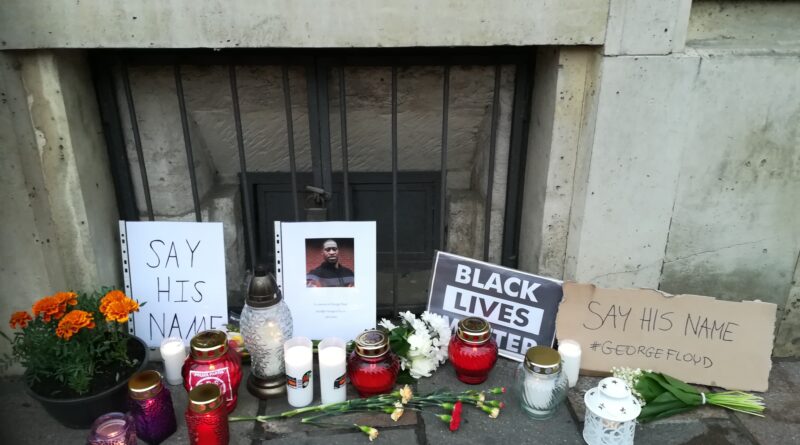 In front of the US Consulate in Krakow, a small but growing memorial has been established for recent victim of police violence George Floyd.

Who is George Floyd?

Floyd, an unarmed 46-year-old black man, was detained by police in Minneapolis, Minnesota on May 25th on suspicion of using a counterfeit $20 bill. While Floyd was immobile, handcuffed and pinned to the ground, a white police officer (Derek Chauvin) placed his knee on Floyd’s neck for nearly nine minutes, ignoring Floyd’s pleas that he was unable to breathe and his ensuing lapse into unresponsiveness and death. The four involved officers have since been fired, and Chauvin – who already had 18 official complaints against him – has been arrested and charged with third degree murder and second-degree manslaughter.

Why are Americans protesting?

A mobile phone video of Floyd’s murder taken by an onlooker was live-streamed on Facebook and went viral. In the following days, protests have spread from Minneapolis to cities across the US, some of which have involved destruction of property and further police violence.

Demonstrators tie George Floyd’s death to wider systemic discrimination and violence by American police against people of color going back to the beginning of American history. A more recent string of deaths of unarmed black people including Eric Garner, Sandra Bland, Trayvon Martin, and Tamir Rice contributed to the rise of the Black Lives Matter movement to protest and draw attention to the issue.

What is the memorial in Krakow?

A photo of George Floyd along with notes, flowers, and candles have been placed in front of the US Consulate at ul. Stolarska 9 in Krakow. They are meant as a symbolic tribute to Floyd and, in the words of local organizers, to show employees of the consulate the the US government “does not have our consent to racist actions of the police state.” Organizers have encouraged sympathizers to visit and leave their tokens of support today and in the following days when they can, taking necessary hygiene precautions against the ongoing COVID-19 pandemic.

One thought on “Memorial in Krakow for George Floyd, black man killed by US police”