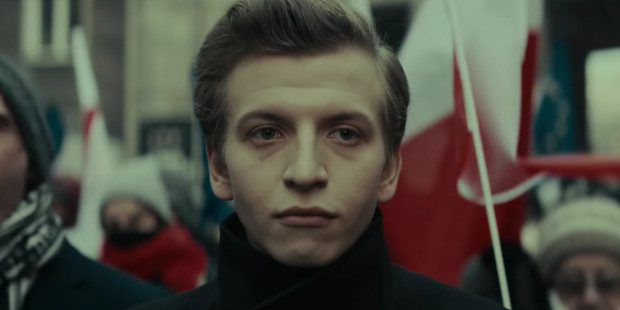 In less than one year Jan Komasa delivered a devastating directorial one-two combo to the big screen. Most viewers should find worth now relishing Komasa’s golden period that – to tell the truth – has never stopped since he entered filmmaking.

Oscar-nominated Boże Ciało (Corpus Christi) and Sala samobójców Hejter (The Hater) are built around two intrepid characters that are worlds apart. The mission of self-proclaimed priest and “healer” Daniel (Bartosz Bielienia) is to put back together a divided community at the countryside. Tomek “the Hater” (Maciej Musiałowski), on the other hand, works on sowing discord in the society in order to climb the social ladder in Warsaw. Not surprisingly, there is the hand of writer Mateusz Pacewicz in both the scripts bringing a breath of fresh air into Polish cinema.

Even if the expression “suicide room” does not appear in the international title of the Polish director’s most recent film, The Hater is a spin-off of Komasa’s first feature film, Sala Samobójców (Suicide Room), which was a sensation back in 2011: “The Hater is not a sequel but is part of the same fictional universe with similar rules”, explained the director. Taken together, these two films can be regarded as a “diptych of youth unrest”.

The character of Beata Santorska (Agata Kulesza), an obscure PR specialist and the emotionally absent mother of suicidal Daniel in Komasa’s full-length debut, returns in The Hater as the one that gives Tomek a chance to make a career out of propagating fake news and hatred. Expelled from college for plagiarism, the boy is treated with contempt by his benefactors in Warsaw. But he will not disappoint Beata, who assigns him to a defamatory campaign against Paweł Rudnicki (Maciej Stuhr), a liberal politician running for mayor in Poland’s capital city.

After all, the relationship between hate and violence is also a major topic in Suicide Room. It’s just that, in the second component of Komasa’s diptych, hatred moves in a different course. It is self-directed in the first feature, which shows Daniel punishing himself with injuries and social isolation, while in The Hater Tomek’s resentment is directed outward. Unlike Daniel, Tomek appears to be immune to internet gaming disorder. The virtual world of video games is only the recruitment platform that he needs to bring his fiendish scheme to the next level. Komasa deserves kudos for showing the process of polarization at work in Polish society, with all that the mayhem this could entail.

There is question mark regarding the international release of The Hater, which screened for a few days in Poland prior to COVID-19 outbreak. But it has earned some accolades from critics, winning the International Narrative Competition at the Tribeca Film Festival – a first for a Polish entry.

Currently the film is available on the streaming platform vod.pl for domestic users without English subtitles.