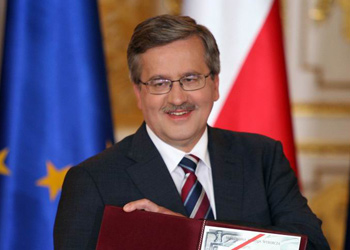 Though the second and decisive round of the presidential election took place at the beginning of July, victor President-elect Bronisław Komorowski will have to wait until the first week of August to have the “elect” removed from his title.

According to Polish law, before a new president can be sworn in, the Polish Supreme Court must first formally announce the winning candidate within 30 days of the election. After the formal announcement, the Sejm (Parliament) and Senate have seven days to ratify the court’s decision and swear in the new president.

Yesterday, the Supreme Court announced that it will give its decision by 10 am on 3 August. That means that Poland will have its next president by 10 August at the latest. However, if the Supreme Court finds any reason to disqualify the election results, a new election would have to be held within 10 weeks, though the chances of this occurring are quite low.