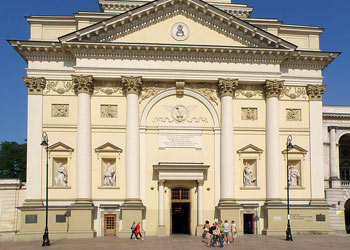 Since the days immediately following the Smolensk tragedy, a makeshift memorial in the form of a large wooden cross has stood in front of the Presidential Palace in Warsaw. However, many politicians and citizens, including President-elect Bronisław Komorowski, have stated that the symbol is inappropriate for the location, and should be moved. Yesterday, an agreement was reached for its removal.

The wooden cross will be moved about half a kilometre down the street from where it stands, to St. Anne’s Church on Krakowskie Przedmieście Street (pictured). The agreement between the Church, the Presidential Chancellery and the scouts states that St. Anne’s Loretto Chapel will be the new home of the cross, and it will be moved between 5 and 14 August, which are the dates of the annual pilgrimage to Jasna Góra. It will be placed next to a Katyń memorial already located there.

The controversy surrounding the cross has centred around two issues: whether it is appropriate for a religious symbol to stand on public grounds, and the issue of security. Presidential security services have stated that the crowds that gather daily to pay tribute to the memory of the victims of the crash are a possible threat to the safety of the president-elect.

One of the most vocal figures opposing the move has been Jarowsław Komorowski, brother of the late president.

The cross was erected by the Polish scouts as an appeal to Polish authorities to construct a monument to the victims of the plane crash in Smolensk, which include the president and first lady, Lech and Maria Kaczyński. No plans for a permanent memorial have been announced yet.