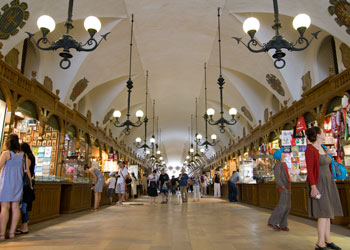 Despite some technical difficulties, the mayor of Krakow, Jacek Majchrowski, participated in the official opening ceremony of the Sukiennice this past Monday. The market hall has been restored to its 19th century glory thanks to a new floor made from polished sandstone, restored oak market stalls, repainted emblems, renewed shutters and wrought iron chandeliers.

All stalls have been modernised; sweltering summer days and freezing winter afternoons will now only seem like a bad dream for the sellers. The renovation was necessary in order to make the building, which consists of three parts – the market hall, a branch of the National Museum (upstairs), and the underground museum – a uniform space. 23.5 million złoty were spent on elevation work and hall renovations alone.

As the mayor entered the Sukiennice on Monday, the sellers welcomed him with a “Thank you Mr. President, Sellers from Sukiennice” sign. Majchrowski said he wanted to make the stalls more comfortable places to work. “I hope it worked,” he said in his speech.

The sellers are happy with the facelift but electrical problems have slightly dimmed their enthusiasm. On Monday the lights flickered during the ceremony and left some sellers in the dark as the mayor made his way through the building. Other than lights, cash drawers also did not function, which made it difficult to do business.

Representatives of the Concern for the Restoration of Historical Monuments (Przedstawiciele Przedsiębiorstwa Rewaloryzacji Zabytków) say that all of the installations are functioning, so the lack of electricity does not result from their error. So where does the problem lie? Halina Marcisz, assistant director of the Management Board for Municipal Buildings, the investor of the renovation work at Sukiennice, said that the problem results from the installation of meters on the premises. Marcisz assured that everything should be working smoothly in no time.

The first floor, which encompasses a branch of the National Museum in Krakow, will reopen in September.