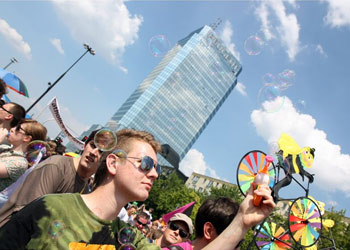 On Saturday, 17 July, the streets of central Warsaw looked a lot more colourful than the usual shades of grey, when the largest European lesbian, gay, bisexual, and transgender (LGBT) Pride event took place, for the first time, in a former communist nation in Central and Eastern Europe. The EuroPride festival is a yearly event for the European LGBT community and its supporters, and is hosted by a different European city every year.

The festival’s main event is a pride parade – a Mardi Gras-style march through the host city that usually attracts thousands of participants. This year, the parade through downtown Warsaw included about 8,000 revellers, from all over Europe, as well as several visitors from as far as the United States and the Philippines.

However, the event was subdued compared to previous years, when a crowd of 100,000 marched through London in the first edition in 1992, or when 1.2 million people took part in Madrid in 2007.

One reason for the low turnout is the history of violence and countermarches taking place during pride events in Poland. The annual Tolerance March in Krakow, which became the Equality March in 2010, has always drawn a group of protesters, largely from religious and right-wing groups, and each year the marchers are surrounded by a row of police officers in riot gear for protection.

Such was the case in Warsaw on Saturday, as small counter-demonstrations were broken up by about 2,000 police officers, and anti-gay protesters throwing eggs and other objects were detained.

Nonetheless, despite the 30+ degree heat blaring down on the marchers and counter-demonstrators shouting obscenities, the participants of EuroPride 2010 managed to march on, with drums, vuvuzellas, and loud music keeping up the party atmosphere.