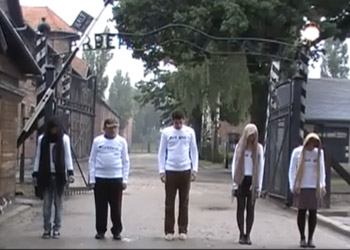 Adolek Kohn, an 89-year-old survivor of the Holocaust, has stirred up quite a controversy by dancing on what could have been his grave. In a video (see below) that had become quite popular on YouTube, the Australian grandfather is shown dancing to Gloria Gaynor’s “I Will Survive” with his daughter and grandchildren in several former Nazi concentration camps in Poland and Germany, including Auschwitz.

Filmed last summer, the four-and-a-half minute clip was filmed by his daughter, Jane Korman, and first shown at an exhibition in Melbourne in December, and then appeared on the video sharing website YouTube in January. However, it did not gain notoriety until this month, when several neo-Nazi websites embedded the YouTube video. A short time after that, it went viral.

In Poland, the video has indeed caused contention, as many commentators have deemed it “inappropriate” and “disrespectful”. The reactions have largely been mixed, however, with one Jewish community leader, Piotr Kadlcik, telling the AP, “If someone else were to do it, I would find it highly inappropriate. But in the case of someone who is Jewish and who is a Holocaust survivor, … these people lived through things that we, fortunately, cannot imagine.”

At the end of the video, Kohn tells viewers: “If someone would tell me here, then, that I would come, 60-something-three years later, with my grandchildren I’d say ‘What you talking about?’ So here you are. This is really a historical moment.”

His daughter, a Melbourne-based artist, told the BBC: “It was really important for me to create some sort of work that had a fresh interpretation of the Holocaust. Especially for the younger generation, because I could see that even the word, ‘Holocaust’ and the images that one sees of the Holocaust were numbing and in fact, they weren’t even interested.”

After getting over half a million views, the original video was removed from YouTube due to a copyright claim by Australasian Performing Right Association. However, it has been posted on numerous other video sharing and social media websites, and you can watch it below.

See also: How many neo-Nazis does it take to change a light bulb?

What are your thoughts on the video? Tell us in the comments below.