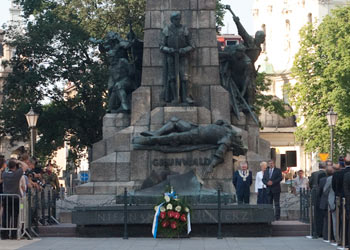 While the official anniversary of the Battle of Grunwald, which took place on 15 July 1410, is today, ceremonies began yesterday and featured a visit to Krakow from Polish President-elect Bronisław Komorowski and Lithuanian President Dalia Grybauskaite. The main event was the opening of the “Token of a Magnificent Victory” exhibition at Wawel Castle, which was attended by both heads of state. Before viewing the exhibition, both leaders spoke on Matejko Square, in front of the Grunwald Monument.

Continuing the remembrance celebrations, today’s events include a re-enactment of the battle on the same site, as well as an evening commemorative concert in the Wawel Castle courtyard.

Below are our photographs from the ceremony at the Grunwald Monument at Matejki Square, as well as the exhibition at Wawel Castle.

For more information on Grunwald, the exhibition, and accompanying events, please read our interview with Director of Wawel Castle Professor Jan Ostrowski.