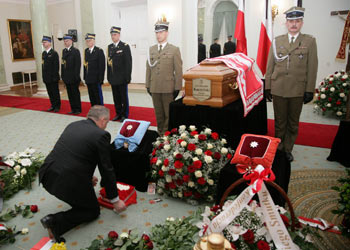 Polish television network TVN24 has released new materials that are reportedly recordings from the black boxes of the crashed Tu-154 plane that killed President Lech Kaczyński and 95 others in April. The station is reporting that the transcript from the cockpit recording is incomplete, and a previously unreleased part of the recording is stirring up controversy about the entire investigation of the plane crash.

According to the television station, the doomed plane’s captain, Arkadiusz Protasiuk, said during the flight, “If [we or I] don’t land, [they or he] will kill me”. The recording is said to be unclear, and the exact pronouns used could not be determined. The context itself is also unknown. This part of the recording was said to be unintelligible during the initial investigation.

While the Polish government announced that they had recently deciphered previously incomprehensible parts of the recordings, Justice Minister Krzysztof Kwiatkowski, who spoke to the press yesterday, declined to confirm the accuracy of TVN24’s report.

If the report of the recording is indeed accurate, it stirs up disturbing questions of who this “he” or “they” was that was putting pressure on the pilots to land in what had been described to them as dangerous conditions. Some Polish media have speculated that Kaczyński himself might be the “he”, as in August 2008, the late president had threatened his pilot when he refused to land under dangerous conditions in Tbilisi, Georgia.

The justice minister stated that once more information is known by the Polish investigators, it will be declared to the public. However, no official announcement has been made to date.