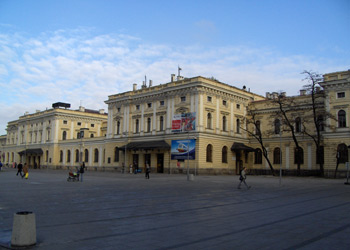 As many visitors who arrive to Krakow by train know, the current Central Train Station in Krakow is underwhelming at best, especially when compared to the adjacent shiny new bus station or Galeria Krakowska shopping centre. However, it looks like the station will soon receive a long-overdue facelift.

According to today’s Gazeta Wyborcza, a Katowice-based contractor has been awarded the contract for the construction of a new Central Train Station for Krakow. The firm, Budus, had submitted the winning bid, as was decided by Polish State Railways (PKP).

The new railway station will be constructed on the premises of the current underground platforms, and will be connected to the fast tram tunnel, a parking lot, and the bus station. Ticket booths, restaurants, and luggage storage will be located within the new station.

The construction of the new underground station will be financed from the state budget and EU grants. Of the 63 million złoty contract proposed by Budus, 70 percent be covered by EU funds. The current price almost half the costs estimated by the railways three years ago.

Work on the project is to begin in October of this year, to be completed in mid-2012.