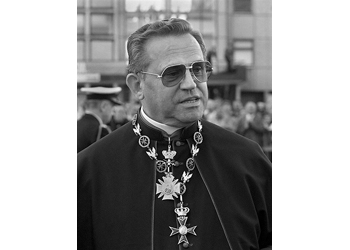 The Polish priest Henryk Jankowski, famous for his support of the Solidarity movement in the 1980s, passed away yesterday evening at the age of 73 in Gdańsk. While the official cause of death has not been stated, the priest had been suffering from diabetes for years.

The Roman Catholic priest originally came to prominence by joining the Solidarity movement in 1980, when in September of that year he performed a mass for the striking workers of the Gdańsk Shipyards, led by Lech Wałęsa. Afterwards, Jankowski was closely watched and informed on by the secret police, though new allegations of collaboration – possibly unintentional – with the communists arose from a 2009 IPN (Institute of National Remembrance) report. In 1990, he was named honorary chaplain to the Pope, and was known as “the chaplain of Solidarity”. Afterwards, he served as the provost of St. Bridget’s Church in Gdańsk.

However, in the 90s Jankowski’s Solidarity-era record was marred by controversy. After Poland’s transition to democracy, the chaplain made a number of controversial statements criticising the European Union, as well as anti-Semitic remarks during his sermons, and was investigated for allegations of sexually abusing a minor, though he was never convicted. He was also criticised for selling a wine brand with his image, as well as his taste for luxury goods. He was suspended in 1997 from preaching for one year, and was dismissed from his position at St. Bridget’s in 2004.

A funeral mass will take place at St. Bridget’s at 11 am on Saturday, 17 July.