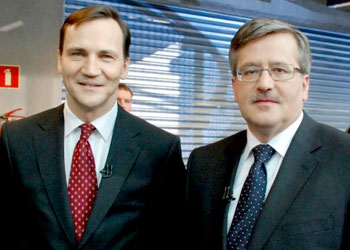 The President elect met with Radosław Sikorski, Minister of Foreign Affairs, on Tuesday in order to begin the process of planning his state visits.

Sikorski told Polsat News that a few concrete decisions were made during their lengthy discussion. Upon further inquiry, he said that besides the calendar of the President elect’s official visits and the arrivals of foreign heads of state, “the filling of a few embassy positions, and the President’s participation (…) in Foreign Service Day” had been discussed.

Sikorski expressed his hope for Komorowski to live up to his campaign promises to make Brussels, Paris and Berlin his first priorities for official visits. When asked about the USA he replied, “this will probably take longer”. When it comes to Russia, Sikorski said that, from what he knows, President Dmitry Medvedev will visit Poland first, although “the date has not yet been set”.

According to Sikorski, Komorowski’s governmental policy will continue to strive for “reconciliation with Russia”. The minister stressed the difficulty of such a task but also said that, while Komorowski is a person who “understands the pain of our history”, he believes that historical politics should not extend to present day foreign politics.