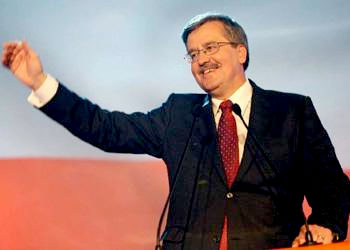 From afar, the election of Bronislaw Komorowski, scion of an illustrious noble family, could be painted as a symbolic return for his embattled class, a sort of full circle after years of struggle. Komorowski was a dirty word in Polish politics during the Soviet era. The new president’s kinsman, Tadeusz Komorowski (code-name Bór), had served as Commander-in-Chief of the wartime Home Army (AK), the official resistance movement so demonised by ‘Uncle Joe’ Stalin. ‘Bór’ Komorowski fled Poland as the Red Army extended its grip over the country. He would never return. As with several other wartime leaders, a death sentence was pronounced in absentia. His kinsman Bronisław would himself be thrown into prison for his role in the anti-communist protest movement. Now he will take up residence in the Presidential Palace, one of the very few buildings in the heart of the capital that survived the apocalyptic Warsaw Rising, the doomed battle against the Nazis that ‘Bor’ Komorowski commanded in ’44.

But of course, Poland defies such simplistic analysis. The nobility that remained in Poland after the war – like the clergy – had its fair share of communist “collaborators”. One of the most hated presidents of the Cold war era, General Jaruzelski, was none other than a Polish nobleman. The general’s sinister dark glasses were in fact a medical necessity as he had been partially blinded in the snows of Siberia, where he was sent as a “class enemy” by Stalin in 1941. It was a peculiar Road to Damascus conversion to the communist creed.

As it was, Bronisław Komorowski, the candidate for the centre-right Civic Platform party (PO – Platforma Obywatelska) did not sweep into power on a wave of nostalgic, traditionalist sentiment. Indeed, his party’s supporters complained throughout that the Church – that key bastion of traditional virtues – had shown flagrant bias against him, likewise the state-owned television channels. In the final run-off, it was a fairly close call for Komorowski, who won with 53.01 percent of the vote against 46.99 percent of his right-wing opponent, Jarosław Kaczyński.

Elections were always due to take place this year, but it has been widely postulated that Kaczyński’s campaign was helped significantly by the death of his twin-brother Lech, the late president, in the Smolensk Air Tragedy of April 10th. Opinion polls showed that the Kaczynskis’ right wing Law and Justice Party (PiS – Prawa I Sprawiediwość) was lagging far behind prior to the catastrophe. For many, the crash near Katyń placed Kaczyński in a long line of patriotic martyrs, the site of the accident – holy ground – accentuating this feeling.

However, as the coloured maps revealed in today’s papers, the election divided Poland in a consequent fashion. Not only is there a striking divide between east and west – the poorer east voting for Kaczyński, the west for Komorowski – there is also a divide between city and country. Virtually all the pockets that show a victory for Komorowski in the centre and east are in major cities. Komorowski was always the more cosmopolitan, liberal choice, and for many years his party has been considered the least extreme choice in Polish politics.

The victory for Komorowski will see a monopoly of power for the Civic Platform party, a situation that has already inspired plenty of challenges. “Now you’ve got complete power, you’ve got one year to show what you can do,” bellowed the front page of Fakt, Poland’s tabloid equivalent of The Sun. “The alibi for the Civic Platform is over,” declared a columnist in the same paper, “now it’s time for genuine results”.

Tensions between the late president, Lech Kaczyński, and Prime Minister Donald Tusk, had been a continual source of embarrassment over the last few years, occasionally causing scenes that made a mockery of the pair at international summits. Such problems are unlikely to follow now that one party has all the cards in its hands (a factor which has caused alarm for some). Indeed, Komorowski was widely criticized for being a somewhat dull, directionless candidate during his campaign – a puppet in the making. Alternatively, Komorowski’s steady, non-temperamental demeanour – a rarity in Polish politics – may indeed stand him in good stead for the presidential office. The results will soon become apparent.