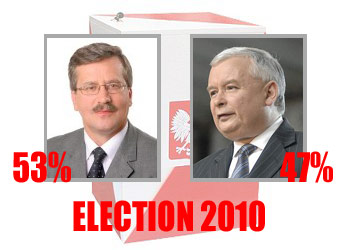 Bronisław Komorowski, centre-right candidate for the presidency, has unofficially been accepted as the victor of yesterday’s run-off.

Today’s figures echo official predictions, but there was panic in the Komorowski camp around midnight when Kaczyński slipped into the lead with 50.4 percent against the 49.6 percent of Komorowski.

When Poles awoke this morning, the balance had returned, and Komorowski’s Civic Platform party was in celebratory mood.

With an outright Komorowski victory, the Civic Platform will enjoy not only a majority in parliament (the Sejm) but also control of the presidential palace, a situation not seen in Polish politics for half a decade.

The elections had previously been scheduled for late September/ early October, but the Smolensk air tragedy brought matters forward three months. The death of former president Lech Kaczyński, twin-brother of Jarosław, is widely accepted as having helped the campaign of the right. The Kaczyńskis’ Law and Justice Party (PiS), was considered a long shot after widespread disaffection towards the end of the late president’s five-year-term. However, it appears that the boost of popularity for Jaroslaw Kaczyński was not enough to throw Komorowski off-track. According to this morning’s figures, a member of the Kaczyński family will not be returning to the presidential palace for the foreseeable future.