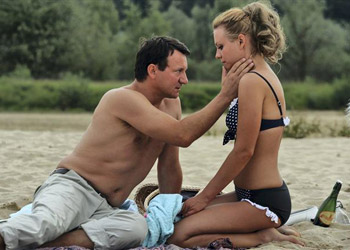 Last year’s Polish Film Festival sparked a wave of enthusiasm about a return to form for the country’s film-making after a long spell in the wilderness. Borys Lankosz, who won 2009’s Golden Lions Award for The Reverse, told the Post that he was nervous of even talking about a revival for fear it might peter out. However, the winner of this year’s lions, Little Rose (Róźyczka) shows that last summer’s success was no flash in the pan. Indeed, in late June, Little Rose scooped the Best Director gong in Moscow, signalling that the film may well go on to reach a wider audience yet – it richly deserves to do so.

Little Rose takes an unflinching look at an explosive period in Polish post-war history. The year is 1967 and Israel has just dispatched Egypt and Syria – key Soviet allies – in the Six-Day-War. Cheers of approval erupt from Polish dissidents. A vehement backlash follows. Thousands of “Zionists” are pushed to leave the country – they must ultimately depart on one-way passports, forced to renounce their citizenship once and for all. The old spectre of the Jewish bogeyman has reared its head once again, but this time, the Communists are pulling the propaganda strings.

In Little Rose, these heady events provide the backdrop for an intimate study of the dissidents’ plight. Slithering though their midst is the poisonous figure of the informant. “Little Rose” is the pseudonym of Kamila, a young graduate who is cajoled into spying by her lover Roman, a security services functionary. The plot is loosely based (there are many crucial differences) on the story of Paweł Jasienica, a celebrated historian who was informed upon by his girlfriend (later wife) for many years. The case caused a furore when it was revealed in the 90s, sparking a bitter court battle about who should inherit the rights to the late author’s books (Jasienica died oblivious to the betrayal).

From the off, director Jan Kidawa-Błonski has struck gold with his cast. Robert Więckiewicz is electrifying as the brutish, haunted Security Services stooge Roman, who is desperate to deliver the goods to his superiors. His target, the fictional historian Adam Warczewski, is played by seasoned veteran Andrzej Seweryn, who gives a glowing performance as a gentlemanly academic conspiring for a return to democracy. Between the two lies – in both senses – Magdalena Boczarska, as the comely yet somewhat naive young blonde who does the dirty work.

This is a vivid, sharp and compelling film that is well-structured and rooted in a sincere bid to wrestle with uncomfortable truths. Director Kidawa-Błonski, who co-wrote the script, deserves applause for handling these thorny subjects in a lucid, measured yet engrossing fashion. He has coaxed nuanced performances from his cast, deftly evoking the insecurities and contradictory elements at play in human nature. Looming over it all is the deranged mindset of the totalitarian state, and the fear and desperation that filters down from the top (off camera is Moscow itself, which the Polish Party must please to save its own skin). The crushing of the student riots in ’68 provides a symbolic climax, with bus-loads of workers shipped in to bash demonstrators – a painful historical fact.

Some of the later twists in the plot may seem slightly contrived for dramatic effect. However, they are nevertheless effective in illustrating the crushing nature of the system, and in many cases, the characters’ destinies echo individual historical precedents. Crucially, the film manages to feel intimate and focused whilst simultaneously painting events on a grand canvas. A strong sense of time and place is captured, and with it, the winds of fear that were unleashed through society.

Little Rose provides yet more gratifying evidence that there are many gifted film-makers at large in Poland – spanning several generations. There seems to be a renewed sense of eagerness (and opportunity, partly thanks to the Polish Film Institute) to tackle difficult social and historical issues. Little Rose stands alongside Bugajski’s General Nil, Wajda’s Katyń, Lankosz’s The Reverse and Kędzierzawska’s A Time To Die as amongst the most vital Polish films of the last three years. At it happens, the film has much in common with Florian von Donnersmarck’s memorable The Lives of Others, but for this reviewer, it was Little Rose that left the deeper cut.