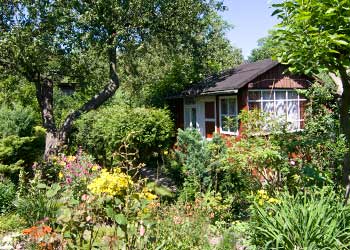 Summer is here and many Cracovians will be spending their evenings not at home with their feet up in front of the TV, a nice cold beer in hand, but on their allotments, trying to catch up on a very late and wet start to the 2010 growing season. The cold beer will probably feature somewhere in the background, though.

For those of you who don’t know, an allotment (a “działka” in Polish, or a community garden in the U.S.) is a small subdivision, usually between 100-200 m2, of a larger plot in or around a city that is tended to by people who don’t live on site. It’s been a popular way for many Polish families and seniors to spend time outside of cramped apartments for several decades, and during communism, the right to an allotment ensured that many people had a healthy diet.

I’m one of these beer-drinking allotmenteers. For the last couple of years I’ve had an allotment at my family’s place about 40 minutes drive away from Krakow, but the journey, the very sandy soil and envy of my friends’ successes (Greek and Thai basil, butternut squash, black raspberries, white currants, black tomatoes and round courgettes) inspired me to get my own. Besides that, there was the prospect of outdoor barbecues and perhaps the odd film night or two during the long, warm summer evenings I was naively expecting. Alas, the never-ending rain means that the gardening will probably have to wait until next year.

When I started looking for an allotment nearer to Krakow, I thought there were just two options; Cichy Kącik, just across ul. Piastowska from the Błonie, and those on ul. Armii Krajowej, beside the monolithic Salwator Tower. So I was stunned to find out that Krakow has 96 allotment associations, covering 400 ha, almost all originally set up on land nationalised by the communists. Back then they were managed by state-owned enterprises, who handed them out to their employees as a way of guaranteeing food when the centrally-planned economy couldn’t deliver it, and now they are managed by local volunteer-led allotment associations.

Allotments aren’t a particularly Polish thing, and they have a long and mostly happy history in countries such as Denmark, the UK and Germany, where they were set up during the period of industrialisation and urbanisation as a way of feeding the people who moved from farms to work in factories. By the early 1900s, the UK’s allotments supplied much of the fresh vegetables eaten by the poor and even today, every British local authority now has a legal obligation to provide adequate land for allotments if there is demand for it.

In Krakow, like elsewhere, allotments are under pressure, particularly those closest to the centre of town that are most attractive to developers. This isn’t particularly surprising, but what is more worrying is that allotments also seem to be unpopular with a significant number of Cracovians, who see the presence of small gardens and frequently ramshackle huts so close to the centre of the city as a sign of backwardness. It’s ironic then, that it is precisely this kind of integrated development and urban biodiversity that many Western cities are now struggling to recreate.

The reason for this is that small urban farms, such as allotments, are believed to offer a key to reducing greenhouse gas emissions and tackling climate change.

There are several reasons for this. The main one is that the transport, packaging and refrigeration of food are responsible for a significant proportion of the developed world’s greenhouse gas emissions, so growing food nearer to cities will help reduce this. Secondly, with more and more people living in cities away from the sources of food, and with farming moving towards single-crop agriculture and intensive farming, any disruption to food production, by weather, pests or disease, can have a very big impact on a city’s ability to feed its residents quite quickly. Thirdly, as more of a city’s surface area is covered by concrete and materials that reflect heat, it gets hotter (the urban heat island effect), so the demand for air-conditioning increases, which uses more electricity, which generates greenhouse gases. Green areas, which absorb heat and retain water, help cool cities down.

This isn’t just more environmentalist propaganda. There are a growing number of major cities, including New York, Chicago and London, whose mayors are convinced and are spending their voters’ money on developing places to grow food on a small scale. Their progress is being watched by many others who are conscious of the need to adapt to climate change. Unfortunately, this doesn’t seem to include Krakow’s authorities, whose appalling record on most environmental, planning and public space issues speaks for itself. With any luck the upcoming elections will help change that.