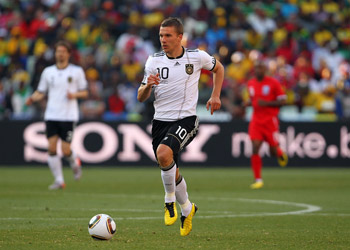 The fact that Poland is not represented by a national side in this year’s World Cup does not mean that no Polish-born footballers are showing their colours on the world stage in South Africa this month — they are just doing it in German uniforms.

The first two thrilling — or heartbreaking — goals scored against England on 28 June by the German national side in the knockout phase of the World Cup were scored by players from Poland’s Silesia region: Mirosław Klose and Łukasz (or sometimes, Lucas) Podolski. Both were born in towns near the German border, in a part of the country where the local dialect and culture share some elements with those of their German neighbours. The two players speak Polish with one another and with some family members.

They also both come from sporting families with a tradition of wearing the Polish red-and-white in international competition. Podolski’s mother, Krystyna Podolska, was a handball player for the Polish national women’s handball side, as was Klose’s mother, Barbara Jeż. Klose’s father was a professional footballer for Odra Opole before moving to France, where he played for AJ Auxerre.

Both families emigrated to West Germany during the Cold War as Aussielder, or persons of German ethnicity who were entitled to “right of return” to resettle in Germany despite never having lived there.

Both also made the decision at a young age to accept positions on the German side, which disqualified them form playing for Poland. Opinions in Poland on the two players’ decisions are mixed, and in both cases, family members were torn between pride and heartbreak when Germany defeated Poland in the first match of the 2008 European Championships in Austria-Switzerland.