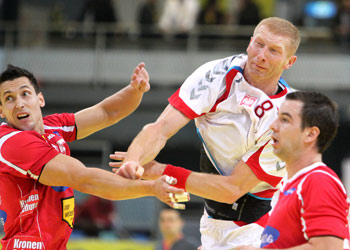 If Karol Bielecki’s playing style had left any room for doubt about his indomitable spirit, then his courage and humanity in the face of adversity can leave none whatsoever. Despite having had his eye gouged out in an international friendly in June, he intends to resume play in mid-July.

In the rough and tumble world of team handball, Karol Bielecki has seen his share of good-natured yet tough competition. In a game where physical play is the rule rather than the exception, injury is not uncommon and fouls are more often punished with minutes in the sin bin than matches on the bench, Bielecki took his medicine as good as he dished it out. He was a lynchpin member of the Poland squad that narrowly missed a place on the podium in the European championships this January and took fifth in the 2008 Beijing Summer Olympics. He’s also an esteemed component of his German club, Rhein-Neckar Loewen. Nothing, however, could have prepared the 28-year-old for the horror that awaited him in the 11 June friendly against Croatia, where a simple accident cost him his left eye, and threatened to end his career.

Bielecki was running back on defence in the early minutes of the match in Kielce when an attacking Croatian player, attempting to pass the ball, accidentally thrust his finger into Bielecki’s eye, sending the 2.02 m (6’7”), 100 kg (220 lb) Pole crumpling to the floorboards, where blood was seen dripping from his face. After receiving attention from the medical staff on hand, Bielecki left the playing surface on his own feet holding a towel to his face. The fans gathered would not learn how serious the trauma was until a day later.

With his eye seriously damaged, Bielecki could nevertheless not be operated on for hours. He first underwent an operation after being taken to Lublin, then was flown to Germany on the private jet of the owner of the German club he plays for, Rhein-Neckar Loewen, where he is on contract until 2015. The second operation was undertaken at the ophthalmological clinic in Tübingen, reputed to be among the best in Europe. It lasted for several hours, and was followed by optimistic reports indicating that he may recover his vision, as the damaged eye was responding to light.

As the days passed, however, those hopes faded, until the announcement was made that his blindness would be permanent, and that his career was over.

Bielecki spoke publicly concerning his predicament, his career, and his permanent partial blindness, as did the other player involved in the incident, Croatian Josip Valcic.

Bielecki’s response amply demonstrated both his stoicism and his generous nature. “It’s okay. I only lost one eye. I’ll learn to live with it. Worse things happen in life. I don’t have any hard feelings toward Valcic. I know he didn’t do it on purpose.”

Valcic, on the other hand, was beside himself with regret at the incident and its consequences. “You have no idea how deeply sorry I am,” he said. “I will regret this my entire life and I will never forget it. I am aware that this could have happened to anyone, but that cannot console me. I am still living through that horrifying moment – when my finger literally penetrated his eye.”

Then Bielecki astonished the world of handball by announcing that he would not retire after all. On 24 June, news began to surface that Bielecki, incredibly, intended to resume training as early as mid-July. “Aside from the fact that I have only one eye, I’m healthy. I’m 28 years old; I have to try. If there is any chance of success, then I need to give it my all to take advantage of it. And I will,” Bielecki told Przegląd Sportowy on 26 June.

He is also realistic about the difficulties he will face with a diminished field of vision and the complete loss of depth perception. Planning to return to training with Rhein-Neckar Loewen when they begin to prepare for the upcoming season, he said, “I don’t expect any slack from the coach or my teammates”.

Nevertheless, his club, the Polish national side, and fans of both have made clear their unconditional support for Bielecki, who is a major star in Germany, where handball is among the most popular team disciplines.

“We will help him in whatever we can. He has a tough road ahead of him now and this will be the biggest challenge of his whole life. But we know that Karol is a real fighter,” said Löwen manager Thorsten Storm. The team is preparing a special rehabilitation program to allow him to use his right eye more effectively in the absence of his left.

Whether he can get his game back remains questionable, but his commitment to the sport he loves is not. His intentions could not be clearer. Referring to the World Championships scheduled for next January, he said, “Nothing stands in my way from appearing in the tournament. I’m healthy, and over half a year I should be able to get used to playing with one eye.

“I want to go to the championships.”