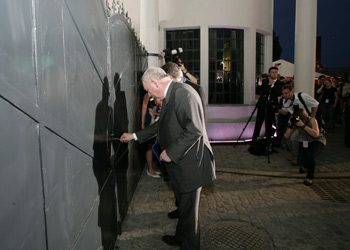 Former employees of Oskar Schindler’s Enamel Factory were amongst the guests of honour at the opening of a permanent exhibition at the site on 11 June. The event marked the end of many years in the wilderness.

“We did not realise how great a task it was that we were embarking upon,” Michał Niezabitowski, director of the city’s Historical Museum, told guests at the opening ceremony.

The main exhibit, “Krakow Under Nazi Occupation, 1939-1945”, has been three years in the making. Launch dates were repeatedly put back, and prior to the initial green light, there were protracted debates about what was an appropriate future for the premises. Mr. Niezabitowski added that it was not without a sense of trepidation that he was finally opening the doors.

Nevertheless, in spite of initial difficulties, and a final bill of 14.9 million złoty (3.7 million euro) – the majority of which was spent on the structural renovation and conversion of the building – there was consensus that the museum is a resounding success.

“They have done a very, very good job,” said Lili Haber, head of the Israeli Association of Jews from Poland and daughter of one of the Cracovians saved on Schindler’s historic list. “The exhibition is not hysterical – there is no blood on the floor,” she continued, adding that the design team also deserved special credit for its technical expertise.

Historian Dr. Edyta Gawron, one of a core of specialists who worked on the content of the exhibition, noted that “all of the team were aware that pictures can provoke strong emotions, and thus the aim was to present material in a way that allowed for a more reflective reaction.”

Dr. Gawron worked alongside authorities on many aspects of the war, including Katarzyna Zimmerer, Barbara Zbroja, Grzegorz Jezowski, and permanent director of the museum, Monika Bednarek.

“Krakow Under the Nazi Occupation, 1939-1945” can be explored within the main administrative building of the factory. The façade will already be familiar to many, thanks to Steven Spielberg’s Schindler’s List, which, together with Thomas Keneally’s book Schindler’s Ark, helped popularise the history of the hard-drinking, womanising German who exploited his labour force and yet was ultimately moved to save over 1,000 Jewish employees from Hitler’s death camps.

“During the period 1939-1945, three Krakows existed side by side,” noted current city Mayor Jacek Majchrowski at the opening ceremony. “There was a Krakow nur für Deutsche [only for Germans], a Krakow enclosed in a ghetto, and an Aryan Krakow,” he reflected, adding that in spite of the clear-cut borders, contacts were forged between these worlds.

“It turned out that amongst all the horrors, there were people who behaved as they should, and this place [the factory] represents one of the best examples of this.”

After a thorough renovation of the premises by architect Jerzy Wowczak in 2008, 27 rooms were constructed according to the designs of artistic directors Michał Urban and Łukasz Czuj. Visitors follow the progress of the occupation, beginning with the bombing of Poland in September 1939 and ending abruptly with the arrival of a second totalitarian power in January 1945, as embodied by Joseph Stalin. The labyrinthine structure, combined with the relatively small scale of the rooms, accentuates the claustrophobic feeling of a city under trial.

“The exhibition will show the dramatic choices that people made,” said co-author of the design, Łukasz Czuj, prior to the launch. “But it should also prompt us to think ‘What would my decision have been?’”

The atmosphere of the era is evoked by recreations of typical Cracovian interiors and street scenes. Key phases of the period come in for special attention, including the notorious Sonderaktion of November 1939 (during which 183 people were arrested, most of them university professors), as well as the creation and liquidation of the Jewish Ghetto.

Original footage from the occupation – much of it recently rediscovered in Poland, Germany and elsewhere – together with photographic stills, provides vivid detail. The experience is further enlivened by fragments of written memoirs and a number of video interviews with survivors of the tumult.

“As a Cracow-born Jewess now living in Israel, the tragedy of the Jewish community is naturally paramount for me,” said Lili Haber.

“But this is the first time that our history has been presented side by side as part of the tragedy of the rest of the population. Hopefully, this will enable non-Jews to relate to and better understand our own experiences.”

Amongst the guests of honour at the opening ceremony was the director of Israel’s Yad Vashem Institute, Mr. Avner Shalev, who concluded that the museum “does justice to history”.

The speeches were complemented by Tram of Memory, a short film by exhibition designer Łukasz Czuj drawing upon archival footage of the German reign of terror. The film was synchronised with a live musical performance by acclaimed klezmer band Kroke.

“It was very moving,” said 85-year-old Dr. Julian Bussgang, a Polish-Jewish veteran of the Battle of Monte Cassino, visiting from Boston, where he settled after the war. “And the exhibition was very well-presented.”

Finally, the mayor opened the iconic gates of the factory. The first to step through was a small group of Oskar Schindler’s former employees, providing an emotional conclusion to the evening.

The city’s historical museum can now exhale after an intense slog. Nevertheless, the premises of the factory will continue to develop, as the lion’s share of the property remains vacant. The hangar-like spaces of the factory proper will be converted into a Museum of Modern Art, and a design by Italian architectural office Claudio Nardi has already been chosen by the city. Work is due to commence over the coming months.

5 thoughts on “Schindler: Unlocking the Past”