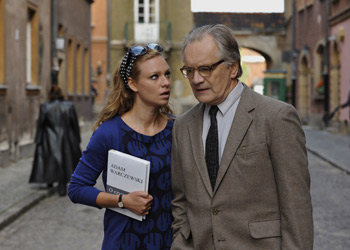 Polish directors walked away with two of the top gongs at this year’s Moscow Film Festival. Jan Kidawa-Błonski won the coveted Best Director award for Little Rose (Róźycka), whilst Borys Lankosz’s The Reverse (Rewers) scooped the prize for Best Debut.

Both films explore the slippery legacy of communist-era informers, a highly inflammatory subject in today’s Poland. Over the past few years, numerous luminaries have been outed as alleged collaborators, from writer Ryszard Kapuśćinski to solidarity titan Lech Wałęsa.

Little Rose was inspired by the plight of the late and celebrated historian Paweł Jasienica, who embarked on a relationship with a younger woman, unaware that she was a paid informant. The Reverse explores similar territory, albeit more in the vein of black comedy. It’s been a fine summer for both directors, with Lankosz winning Best Debut at Seattle, and Kidawa-Błonski scooping Best Film at the Polish Film Festival in Gdynia, an award which Lankosz himself won in 2009.