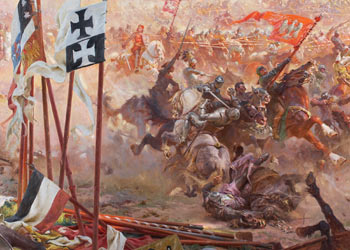 KP: Much of this exhibition revolves around how the Battle of Grunwald was commemorated in previous eras. Krakow was turned into a sort of virtual museum of Polish history in the late 19th century, when the city lay within the Habsburg crown. Do you feel in some senses an heir to those Polish figures who were trying to conjure their country’s past?

Jan Ostrowski: First of all, I would like to stress that it was not possible to prepare an exhibition solely composed of authentic elements from the battle. We have very few documents and original objects relating to Grunwald. We did our best to find everything that still exists, but it would not have been possible to have created an entire exhibition from this material. So that is why we had to move towards the idea of memory and the interpretation of the tradition of the battle in subsequent centuries.

You are perfectly right that this way of thinking reached its apogee in the 19th century. Everything that was happening at that time was related to the past. In Poland, owing to the loss of independence, people needed some tools to maintain their national identity and to create hope for the future. The way of thinking was such that during the 15th and 16th centuries, we were amongst the largest and strongest countries in Europe. Then came the disaster of the division and occupation of Poland by three neighbouring countries. But the feeling was that we were still one, strong and united nation, and there was hope to recover that former status. This historical way of thinking was especially strong in Krakow, because it could find its tangible form here, and this was not the case in the Russian part of Poland, and even less so in the Prussian part. So that’s why Matejko painted his great historical pictures, among them The Battle of Grunwald. The 500th anniversary of the battle in 1910 was the biggest patriotic manifestation ever organised in the years prior to World War I. It had various aspects; political, historical and artistic, and we want to gather the most important documents created for that occasion and show them again to the public – of course with a new interpretation.

I’d like to stress one more thing. On the one hand, we want to remember the celebration of 1910. But on the other, the situation has changed. We are no longer a divided country that suffers under the yokes of three other powers. We don’t need to organise our exhibition against anybody. There would be absolutely no reason to do such a thing. In the 19th century, and even in the first half of the 20th century, Grunwald was seen as a very important event in the eternal struggle against Germany. Of course, this thesis was not entirely correct. It was not simply a battle against Germans. It was a battle with a coalition of armies of various origins. There were even Piast princes fighting with the Teutonic Knights – two of them were captured. So it was not just a conflict between Poland and Germany. Yet it was certainly seen in such a way during the time when that conflict was very real. Thank God we are no longer in that situation. We don’t need to find those sentiments in the Grunwald anniversary.

KP: At the same time, the Battle of Grunwald represented a seminal victory for the Polish-Lithuanian enterprise and the Jagiellon dynasty. Do you think that the later extinction of the Jagiellon royal house in 1572 was a disaster for Poland?

JO: You are perfectly right in saying that the battle – and the war – were very important in creating unity between Poland and Lithuania. It was a legacy that one could always cite and say, well, we have problems, we don’t agree on everything, but we have this common experience to refer to.

As for the extinction of the Jagiellon dynasty, it was a disaster – undoubtedly. First of all, because it marked the end of a good political system in this country. The elections of the following kings were completely free, which sounds very democratic and modern, but it was not good for that time, because the result was obvious – a weakness of power. And a weakness of the central power meant a weakness of the country.

KP: One of the jewels in the crown of this exhibition is the extraordinary diorama by Zygmunt Rozwadowski and Tadeusz Popiel, which was rediscovered in 1989 in the formerly Polish city of Lwów (today Lviv, Ukraine). There has been growing cooperation between Lvovian and Polish institutions over the last decade. Do you feel positive about these relations between Ukraine and Poland since the collapse of the Soviet Union?

JO: Firstly, a few words concerning the picture. It was painted for the 1910 celebration in Krakow, because the Matejko painting was not available. It was not available 100 years ago, and it is not available in 2010. So Krakow produced its own enormous painting depicting the battle. We don’t know exactly how the picture found its way to Lwów, but it must have happened in the 1930s. Probably it was taken there for a temporary exhibition. In fact, it was rolled up, and in this manner it survived the Soviet period in Lwów’s Historical Museum.

It is true that we have achieved quite a lot in the last twenty years with regards to creating a good relationship with our Ukrainian colleagues. I have been in Lwów at least once a year every year since 1987. So I have witnessed the change in temperature in our relations. At the beginning, we were treated as very suspicious in every regard. There were great difficulties in moving beyond the city limits – even a trip to Zółkiew was practically impossible. Then, different paths opened up. Since the early 1990s, we have been able to travel quite freely in the Ukrainian interior. The attitude of our Ukrainian colleagues also changed dramatically. Now I feel that they understand that this cooperation can only be good for both sides. The loan of the current picture (and of other items) for the forthcoming exhibition is a very good example of this new attitude.

I think that our Ukrainian colleagues understood that there is no danger from our side – we cannot take anything from them. We can only share our common experiences. To some extent, we are more advanced in historical research and in the level of restoration work. So sometimes they can learn something, sometimes we can work on some project together, sometimes they will get back one of their pictures or other objects in a better state than it was in prior to the loan.

And for us, Lwów (and the former territory of Eastern Galicia) is very important, because it’s a direct context for what was happening in Krakow and Western Galicia in general.So we are very happy that things are going so much better than they used to 20, 15 or even 10 years ago.

The exhibition, “The Sign of the Glorious Victory,” opens at Wawel on 15th July.