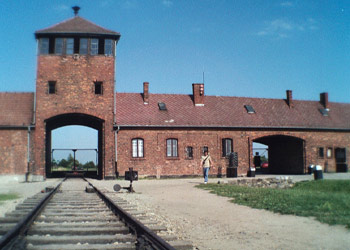 Yesterday, two Canadian teachers were arrested in Poland after attempting to steal unique “souvenirs” from their trip to the Auschwitz-Birkenau former Nazi concentration camp. They were caught with spikes from the rails that were once used to bring in prisoners to the camp.

The men, both in their 20s, were caught when other visitors to the camp saw the men bent over the rail tracks, fiddling with something. People alerted museum security, who apprehended the men with the railway spikes on them, and turned them over to the police. After questioning, the men were released.

While the spikes themselves are not worth any considerable amount of money, they are extremely important as historical artefacts from this dark period in European history. Bartosz Bartyzel, a spokesman for the Auschwitz Museum, told reporters that “For us, this is a case of desecration of a place of memorial. These items are priceless.”

An investigation has been launched, but there has been no word yet on whether the men will be charged in this incident.