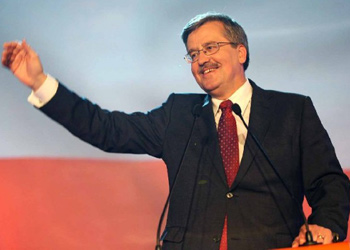 At 8 pm on Sunday, 27 June, the first debate between the two candidates remaining in the running for the Polish presidency took place live on national television. For an hour, PO candidate Bronisław Komorowski and PiS candidate Jarosław Kaczyński went head to head on domestic and foreign issues facing the country, as well as economic matters.

The debate was moderated by reporters from three major stations, TVP, TVN24 and Polsat News. Each moderator asked one question each from three different topics – social policy, economy, and foreign policy – that the candidates had to address, though according to the format of the debate they were not allowed to question each other.

On social policy, Kaczyński favoured protection of pensions and other social insurance, as well as the development of the Polish countryside. Both men came out on the conservative end of the spectrum on social matters such as the legalisation of same-sex marriages or partnerships, in vitro fertilisation, and abortion. Kaczyński referred to his strong Catholic faith several times throughout the debate.

When addressing foreign policy matters, the topics of the Polish mission in Afghanistan and the investigation of the Smolensk plane crash were addressed. Also, a major issue of contention was Poland’s policy towards Belarus. On that topic, Kaczyński took a controversial position by stating that Poland should speak to Russia about Belarus, and not to Belarus itself. Komorowski strongly criticised this statement and accused the PiS candidate of undermining Belarus’ sovereignty.

On the issue of Afghanistan, Komorowski expressed the opinion that Poland’s engagement in foreign conflicts is taking away resources from the modernisation of the Polish army. Kaczyński stressed that Poland’s involvement in these conflicts is important for improving its position on the world stage, and that the soldiers serving abroad are gaining valuable experience.

Economically, Komorowski is more of a proponent of the free-market system than Kaczyński, who favours increased state spending. Komorowski is seen as more market-friendly, particularly as Poland prepares for eventual euro adoption.

After the debate, TVN24 conducted an online survey, in which 24,000 watchers participated. According to the survey, 81 percent believed Komorowski was the victor in the first debate, while only 15 percent saw Kaczyński come out ahead. Four percent thought they had tied. Another survey published in this morning’s Rzeczpospolita showed that 52 percent of about 1,000 surveyed believed Komorowski had won the debate, compared to 28 percent for Kaczyński, and 15 percent for a tie.

While Komorowski was seen as the debate’s winner by several Polish media outlets, he was still criticised for failing to reach out to voters beyond his core constituency. As his margin of victory was a close five percent in the first round, critics say he must appeal to a wider public if he is to comfortably win the second round. Both candidates need to lure leftist voters that supported Grzegorz Napierlaski, who won 13 percent of the vote in the first round, to win the run-off.

The second and final debate will take place at 8 pm on Wednesday, 30 June.