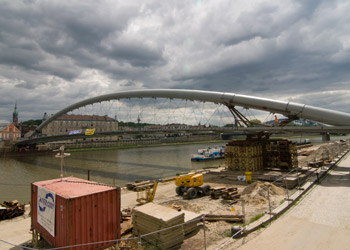 As the 700-ton construction moved slowly across the Wisła River on Saturday morning, a small crowd gathered to witness the complicated operation. No major problems arose during the journey to the other side, which cut the estimated 12-hour operation in half. But the work is not yet done; it will take another two weeks to connect the bridge to the shores.

Inspired by the structure of a leaf, the footbridge, designed by Andrzej Getter, is made up of steel cables connected to an arched arm that holds two walkways. This type of design made it possible to eliminate the use of vertical columns that are often used to support bridges.

Once complete, the footbridge will connect Kazimierz and Podgórze where the old Franciszek Józef bridge used to (ul. Mostowska and Brodzińskiego) and will cost an estimated 38 million złoty.

According to the Gazeta Wyborcza daily, the city council decided to name the footbridge after Laetus Bernatek, a monk who at the turn of 19th century led the building of the nearby Bonifratów hospital.

The official opening of Krakow’s first pedestrian only bridge has been postponed to early August due to last month’s flooding.