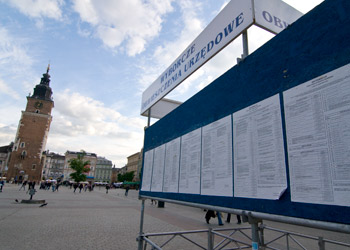 With 11 days left until the 4 July run-off, the two remaining candidates, Jarosław Kaczyński and Bronisław Komorowski, have begun to intensify their campaigns for the Polish presidency.

A major campaign issue that has emerged is Poland’s involvement in Afghanistan. With the death of two Polish soldiers there last week, the matter has once again risen in the eyes of voters. On Tuesday, during a visit to Afghanistan, Komorowski backed a 2012 deadline for the country’s exit from Ghazni Province, where there are currently 2,500 troops stationed. If elected, the acting president promised that he would seek political, rather than military, solutions to the conflict. On the other hand, Jarosław Kaczyński has been a strong NATO supporter like his brother, and has backed the Afghan mission in the past.

Meanwhile, both candidates are fighting to pick up the votes won by Democratic Left Alliance leader Grzegorz Napieralski, who scored an impressive third place finish in the first round, with 13.7 percent of the vote. Considering Napieralski was an unknown before the 10 April plane crash that killed his party’s former candidate, the party leader now holds considerable sway as to the outcome of the second round. “I am going to listen to the voices of the left and of its leader,” Komorowski stated while in Afghanistan.

Napieralski said yesterday that Afghanistan and public health reform are the major issues that will decide which candidate he will endorse in the run-off. Kaczyński opposes health care reform and is against privatisation, which he accused his rival of wanting for the nation’s health services. In fact, Kaczyński has lost a case and today an appeal from the Warsaw Regional Court, which Komorowski brought against him for falsely publicly claiming that Komorowski wants to privatise Poland’s public health service. Kaczyński has been ordered to apologise to Komorowski and is not allowed to repeat his claim.

However, on economic issues, Mr. Kaczyński’s stance is close to that of the SLD leader, as both support generous social services and oppose privatisation. Napieralski is also in favour of a raise in the country’s minimum wage, and stands on the left on social issues such as abortion and IVF treatments.

Prime Minister Donald Tusk, who belongs to the same party as Komorowski, has also stepped up his rhetoric. Yesterday, Tusk called Kaczyński a “cowboy” and a “Russophile”. Alluding to the frequent disagreements between Lech Kaczyński’s presidency and his government, he asked for a year of peace between the government and the executive, because, “In a year we can accomplish a lot”. Were the president and prime minister to belong to the same party, Tusk believes the government will accomplish considerably more than in the past four years.

Both candidates are pushing for a televised debate, which would likely be scheduled for this Sunday. Meanwhile, a debate will start today at noon on the future of the nation’s public health care system. However, of the two candidates, only Kaczyński will participate, along with Deputy Prime Minister Waldemar Pawlak and Health Minister Ewa Kopacz. The debate was initiated by Napieralski, who is hoping to use his post-election sway to bring health care to the table.