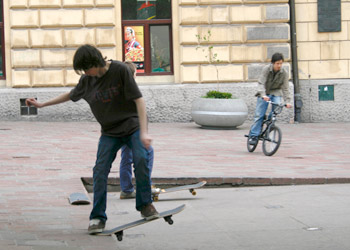 Cleverly named “On the trucks of history,” a new project allows free entry for skateboarders to any branch of the Historical Museum, which includes the Krzysztofory Palace, Hippolit House, the newly-opened Schindler Factory, Nowa Huta Museum, and Town Hall Tower (Wieża Ratuszowa).

The Museum partnered with Cool Team, an extreme sports society, to get the word out to the skaters. Ola Flak, from Cool Team, says that the turnout should be quite considerable since the project “received a lot of attention from the skating community”.

The project kicked off on 21 June, the official Go Skateboarding Day. Skateboarders met by the Cool Sport store on ul. Loretańska 8, skated through the Main Square and headed to the defense walls on ul. Pijarska where a competition took place. On 31 July skateboarders will be able to show off their ollies or heel flips in the recently opened Schindler Factory. The Barbican will host the skateboarding championships on 4-5 August.

In order to take advantage of the free entrance, skateboarders will have to get a special pass, available starting 21 June at the Historical Museum. They will receive a stamp for every museum they visit, with a skateboard, between 21 June and 5 August. Prizes will be awarded to those who collect all of the stamps.