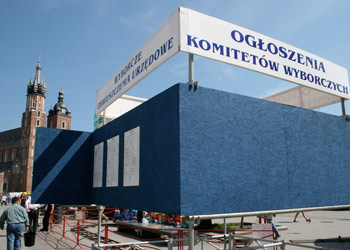 The nationwide election results are in, and PO’s Bronisław Komorowski is ahead of PiS’s Jarosław Kaczyński, though with a smaller margin than earlier polls had predicted. However, how does the election look at the local level?

If the election of the country’s next president were entirely up to the citizens of Krakow, a run-off would still be required, though Komorowski would have more of a lead than in the nationwide results. In Krakow alone, 48.8 percent of voters chose Komorowski, while 32.3 percent chose Kaczyński, according to the National Electoral Commission (PKW). SLD’s Grzegorz Napieralski is in third place in the city, with an even 10 percent, while Janusz Korwin-Mikke came in fourth at 4.5 percent.

However, if all of Małopolska Province is taken into account, Kaczyński would be the winner, with 45.9 percent to Komorowski’s 35.3 percent, according to the PKW. Napieralski sits at 10.5 percent, while Korwin-Mikke’s support falls to just shy of three percent province-wide.

Nationwide, the country stands divided, with the majority of western and northern Poland siding with Komorowski, while eastern and southern Poland sits firmly in the grip of Kaczyński. Of course, as the results in Krakow have shown, there are exceptions, which urban populations generally preferring the Civic Platform candidate, while Kaczyński received greater support in the countryside. Overall, the nationwide turnout was 54.85 percent.

The run-off election is scheduled for 4 July.