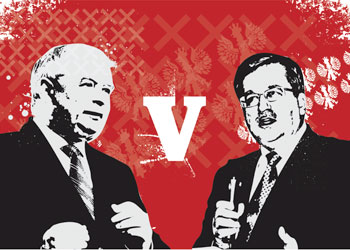 Just one day remains until the presidential election in Poland, and both main candidates, Jarosław Kaczyński and Bronisław Komorowski, as well as the remaining eight, are making their last efforts on the final day of campaigning before voting begins.

Today, Jarosław Kaczyński visited the tomb of his late brother at Wawel Cathedral in Krakow, on the day of their joint 61st birthday. Together with Lech’s daughter Marta, they left flowers on the tombs of Lech and Maria Kaczyński and attended a short private mass. His only public remark concerning the visit was made later today, when he told a meeting of energy experts, “This is a very sad birthday for me”.

Meanwhile, Civic Platform candidate Komorowski, who has received the backing of former Solidarity leader Lech Wałęsa, visited Krakow yesterday, and is headed north. Both candidates are to end their campaigns tonight in Gdańsk.

The latest opinion poll from 17 June, conducted by the Homo Homini institute for Polish Radio, found that Komorowski is still in the lead at 41.1 percent, while Kaczyński has gained three points and stands at 35.7 percent. If any candidate fails to win an outright majority on Sunday, the run-off will be held on 4 July.