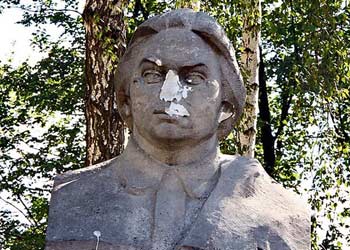 The downtown Kyiv monument to Vladimir Lenin, the greatest communist of them all, looks new and shiny, but a bit weird all the same.

The left hand of the Bolshevik Revolution leader is slightly bigger than it should be. His head is much darker than the rest of the body.

“That’s what we’ve got after the reconstruction,” said comrade Aleksey, a Communist Party member who is among the diehards who guard the monument around the clock. “This is a real architectural jewel. Do you know that it was created by Fedor Merkulov, a follower of the famous French sculptor [Aguste] Rodin?”