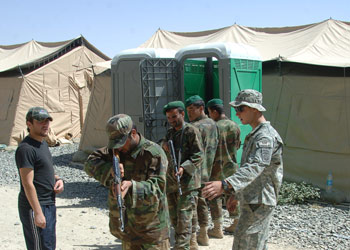 The public outcry from the death of two Polish soldiers in Afghanistan has put pressure on the government to act. On Tuesday, Defence Minister Bogdan Klich announced that Polish troops should leave Afghanistan by the end of 2012 at a teleconference. He also stated that the withdrawal process should involve a gradual handing over of command to local authorities in Ghazni province.

Prime Minister Donald Tusk, meanwhile, wants to discuss an exit strategy during the next NATO summit, which will take place in November in Lisbon.

The latest Polish death in Afghanistan, 29-year-old Pfc. Grzegorz Bukowski, took place Tuesday morning. Two other soldiers were injured in the missile attack on the FOB Warrior base, one of four Polish bases in the country. Before that, Corporal Miłosz Górki lost his life on Saturday when his vehicle was hit by an IED.

18 Polish soldiers have died during the country’s mission in Afghanistan, while about 2,500 troops are currently serving there, which is to be increased to 2,600 later this year.

One thought on “Polish Troops to Leave Afghanistan?”