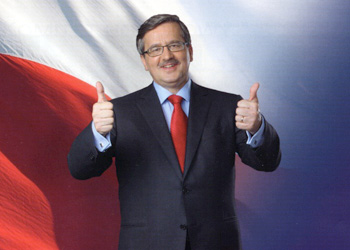 With just five days to go before the election, the Gazeta Wyborcza daily released a new poll today showing Civic Platform (PO) candidate Bronisław Komorowski still firmly ahead of Law and Justice’s (PiS) Jarosław Kaczyński. The poll, conducted by PBS for the Polish newspaper, was taken over the weekend.

The poll shows that both candidates have lost points since the previous poll, conducted a week before. Komorowski lost two points, and stands at 48 percent, while Kaczyński lost four points and stands at 34 percent. Amongst the other candidates, Democratic Left Alliance (SLD) candidate Gzregorz Napieralski will likely end up in third place, with nine percent and a four-point rise, while libertarian Janusz Korwin-Mikke has four percent. Finally, Andzej Lepper of Self-Defense and Waldemar Pawlak of the Polish People’s Party are tied at one percent, with the remaining candidates at less than one percent.

According to the poll, 63 percent of voters with higher educations support the PO candidate, while the PiS candidate has the highest support amongst voters with vocational educations. There is a noticeable divide between city and countryside populations as well: 56 percent of large city dwellers support Komorowski, while about 40 percent of small town and village residents support Kaczyński.

Meanwhile, both candidates have stepped up their efforts in gaining the public’s support. Posters, flyers and notepads, amongst other goodies, are being handed out by the Komorowski campaign in Krakow’s Market Square today, while caps, pens and t-shirts in trademark Kaczyński red and white have been making their way across Krakow and other major cities this week. Meanwhile, SLD candidate Grzegorz Napieralski was spotted handing out apples to workers in Nowa Huta yesterday morning bearing wrappers reading “Gzregorz Napieralski for president”.

PO is still confident that they will win the election in the first round, but in order to do so they will need over 50 percent of the vote. No poll so far has shown Komorowski getting a majority. However, the newest poll has Komorowski winning 60-40 in a run-off, with the PO candidate getting most of the SLD vote if that were to be the case.

See also: Voting in Poland (or Abroad): A How-to Guide