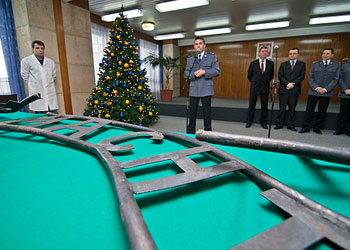 When police arrested Swedish citizen Anders Hogstrom in February, they thought that they had captured the mastermind behind the theft of the “Arbreit Macht Frei” sign. However, Mr. Hogstrom, now in Polish custody as as suspect in the theft, has implicated another man, Swedish millionaire Lars Goran Wahlstrom, as the person who gave the marching orders for the theft.

The second man is Hogstrom’s legal guardian, and well-known in Swedish neo-Nazi circles. The 58-year-old man is thought to be the sponsor of Hogstrom’s National Socialist Front neo-Nazi movement. The allegations were first made by the Swedish press earlier this year, and were now reported by Polish radio station RMF FM. However, the Krakow prosecutors on the case have not confirmed nor denied the reports.

At the moment, three of the five Polish men who allegedly carried out the theft are serving jail sentences, while the others await trial in Polish custody.