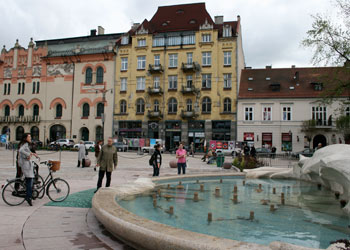 The renovation of Plac Szczepański, one of Krakow’s most historic squares, took over a year. Initially, the project, which began in January 2009, was to be completed in the fall of the same year. However, an archeological discovery slowed the process. Before work could continue, archeologists had to document and secure the findings, which consisted of fragments of well-preserved wooden structures from the 14th century. By December 2009 the site was ready for construction.

For 13 million złoty a layer of new red porphyry, a type of igneous rock, replaced the destroyed stone pavement, then greenery was planted and a 19th century Viennese secession inspired the look of lanterns, rubbish bins, newspaper kiosks, benches as well as bicycle stands. All of this was supposed to tie the square with the Teatr Stary facade and the Pałac Sztuki.

The most important element of the Square is the multi-media fountain designed by Professor Stefan Dousa. On Saturdays and Sundays, twice a day, it incorporates light and music into its usual repertoire.

Nonetheless, the flashy new fountain has brought on some harsh criticism.

Bartłomiej Kisielewski from Horizon Studio told the Gazeta Wyborcza daily that he does not like the look of the square: “We are told to fight with mediocrity and ugliness, to educate society by example, and the ones who should give the best examples do something like this. Smaller elements should be designed discretely, serving as a background for the Pałac, but, because of their flashy style and color they become the main focus. I think the Pałac Sztuki, and other buildings like Teatr Stary, should be the focal points.”

Zbigniew Beisersdofr, an art and architecture historian, told Gazeta Wyborcza: “I am very disappointed. It would seem that everything was moving in the right direction, after all, another square in the centre of town has been cleaned up, but Krakow does not have luck with squares and what happened to Plac Szczepański is yet another example of an unsuccessful use of space.”

“I like the fountain,” said Jacek Stokłosa, a local artist, “but the music and light show is an exaggeration”.

Despite some criticism, people seem to like the renovated space. ZIKiT proudly announced that the fountain “is the only fountain in Krakow, where the water flows downward in three cascades”. Maybe critics will get used to the change, too.