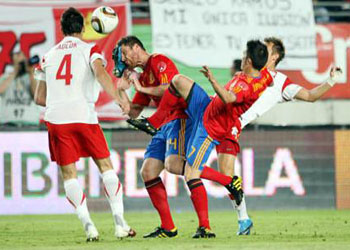 As Spain forges its World Cup weaponry, the young Polish national side found itself in the role of anvil on Tuesday night, losing by a wide margin and underlining clearly how much work remains to be done for the white-and-reds before co-hosting the Euro 2012.

The friendly match was a showcase for Spain’s depth, skill, cohesiveness, patience, power, speed, teamwork, experience, and confidence. The Polish side, unfortunately, displayed none of these qualities.

While only a friendly, and little more than a workout for Spain, the thrashing that their side delivered to Fraciszek Smuda’s squad sent a clear message to other aspirants to the Mundial set to begin later this week: expect no quarter from the talented Spanish team as they seek their first-ever World Cup.

The Spaniards scored six goals by six different players, each of them a marquee name at a major European powerhouse club. First was Barcelona’s David Villa at 12 minutes, then Valencia’s David Silva two minutes later. Not to be left out was Real Madrid’s Xabi Alonso, who score the first of four for Spain in the second half, the others coming from Arsenal skipper Cesc Fabregas and Liverpool’s Fernando Torres (his first appearance since having knee surgery in April), followed by the clincher from Barcelona’s up-and-coming ambidextrous Pedro Rodríguez Ledesma.

Franciszek Smuda, the Poland trainer, had predicted a similar result and conceded freely that Spain was the superior side.

Spain will play its first fixture in the World Cup on Wednesday 16 June against Switzerland, then will go on to face Honduras and Chile to round out the group phase. None of these teams is expected to present a serious challenge to the ascendant Spanish football machine.