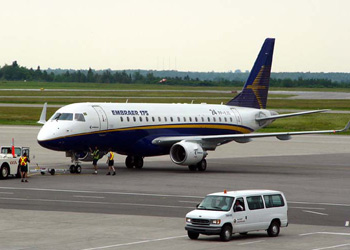 After the tragic crash in Smolensk of the presidential plane, the Polish government fell under heavy criticism for its continued use of the Soviet-era Russian TU-154 aircraft.

However, recent evidence, including the released transcript from the TU-154’s cockpit is pointing towards pilot error as the cause of the crash, rather than the plane itself.

Nonetheless, the Polish government has signed a three-year agreement with EuroLOT, a carrier co-owned by LOT Polish Airlines and the treasury, to lease two Embraer 175 aircraft. One will be used to carry top government officials, and will be refitted to include office and lounge facilities.

The Brazilian-made jets have only been in use since 2003, and are used by several carriers worldwide, including LOT and Air Canada. These planes are only meant for short and medium-haul regional flights, however, so the government will still need to lease or purchase larger craft for trans-Atlantic flights.