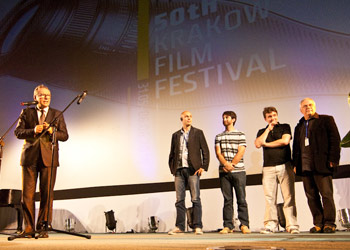 After a week of screenings, parties and special events, the jubilee edition of the Krakow Film Festival concluded yesterday evening at Kijów cinema, with a concert, awards ceremony, and screening of the winning films. Present were several well-known figures from Polish and international cinema, including head juror Krzysztof Zanussi.

The event, hosted by Wojciech Mann, began with a jazz recital by trumpeter extraordinaire Tomasz Stańko, followed by the presentation of the winners and honourable mentions. The documentary competition saw two winners: Andriej Griazew’s Sanya and Sparrow in the 30-60 minute competition, and Kaleo La Belle’s compelling father and son story, Beyond This Place, in the over 60 minute category.

The International Short Film Competition, which was chaired by Zanussi, was won by Jakub Stożek for his film Out of Reach, a documentary about two teenage girls trying to find their mother. In the animated film category, 1000 Voices by Tim Treves Hawkins won for Best Short Animated Film, while Swedish production Incident by a Bank, by Ruben Östlund, won for Best Short Fiction Film.