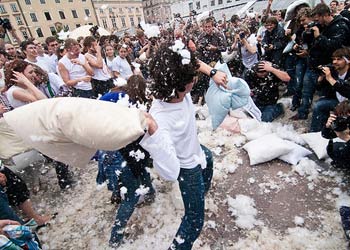 It’s a short-lived tradition, but one of the more original ones in Krakow: the annual student pillow fight on the Market Square. At the strike of 4 pm from St. Mary’s bell tower on Saturday, 29 May, several dozen students, armed only with colourful pillows, descended on the north side of the square, ready for battle. The students wore t-shirts in pre-determined colours, identifying their academic institutions. The fighting soon intensified and a layer of white feathers began to cover the ground.

However, what seems like a fun, albeit unusual, way for students to let loose at the end of the academic year was met with real consequences. The organisers of the event, Urban Playground Krakow, applied for and were denied a permit for the pillow fight from municipal authorities. Nonetheless, the event proceeded as scheduled, though the attendance was significantly smaller than in the previous year, as students were told to come at their own risk. Some of those who appeared did pay the consequences, as police officers quickly appeared at the scene. Though they did not break up the battle, they did issue 15 citations, totalling 1,650 złoty in fines, for disturbing the peace and littering.

After the pillow fighters dispersed, a small group of students stayed behind to clean up the mess of feathers. Despite the police intervention, the organisers declared the event a success and are already planning more “happenings”.