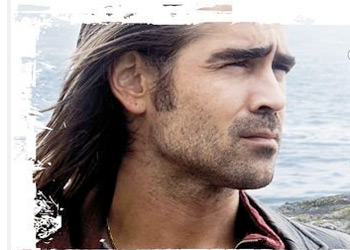 Billed as a blockbuster, Ondine gives the appearance of a low-budget indie film, simple in creation but with a quirky story. Putting Colin Farrell at the helm gave this little tale of a chance encounter in an Irish fishing village a much wider audience. In Poland, the real-life romance between Farrell and co-star Alicja Bachleda-Curuś, whose family is a famed clan from Zakopane, is ongoing tabloid fodder.

In Ondine, Farrell plays Syracuse, a bedraggled fisherman who is beset by a drunken and foolish past, though now sober and doing his best for his ill, wheelchair-bound daughter. Most people call him “Circus”, a name that once fit his antics well, but which he clearly doesn’t like. Farrell deftly shapes this character, revealing the pride of a man frustrated by his own failures and who has learned to be skeptical of the outside world. Into Syracuse’s small world one day comes a suprise visitor, Ondine, who is swept up in his fishing net. Still alive, Syracuse revives her, then by her wish hides and protects her. Events lead others to wonder if Ondine may be a mermaid, or more accurate to Irish folklore, a selkie, a seal-like woman. Syracuse’s daughter (Allison Barry) believes firmly in this possibility and tries to help Ondine in her quest to become human. Ultimately this becomes the film’s quest, though Syracuse seems curiously open-minded about the whole affair, apparently just happy to have a woman by his side again.

For her part, Bachleda-Curuś plays the role of a sensual sea creature quite well, though Farrell easily overpowers her onscreen. As the film progresses, her Irish accent mixes with her native Polish accent and seemed, at first, to betray the shroud of mystery we had acquired. Fortunately, a second storyline resolves the plot and renders her slip moot, intentional or not.

In the end, Ondine doesn’t demand the most from its actors or its audience, but provides a sweet, charming “what if” throughout.