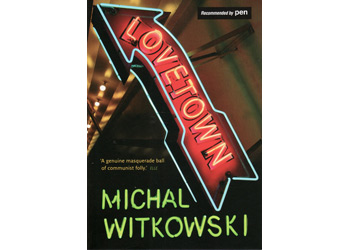 Lubiewo, or Lovetown, was a cultural sensation when it came out in Poland in 2005, and the author, Michal Witkowski, has been lauded as one of the young rising stars in Polish literature. Poland has a pantheon of famous writers who were fairly openly gay, but this was the first time that a novel was written that was explicitly gay itself. And I do not use the word explicit here lightly. The book is about gay life during communism then afterwards. It is in the form of individual stories and vignettes of gay life, and could be read partly as a trip down memory lane, when being gay had much greater risks than now. These stories are bawdy, about flesh, bodies, and fluids. In the Polish reviews some pointed out the similarities of Lovetown to Boccaccio’s The Decameron. Like The Decameron, it is made up of independent tales that intertwine, and like the latter the stories are often of the earthy type. However, in The Decameron, the stories are told in a villa outside of Florence as the plague rages in the city. In Lovetown, the stories are told on a nude beach near the German border (called Lubiewo, hence the title of the book), and the plague, well, if one were to make an analogy, it might be HIV, but perhaps the better analogy to the plague would be the communist times that have now receded into the past.

Throughout the book there is a tension between before and after: gay life under communism, when being gay was completely marginalised and criminalised, and now, when the questions are more about tolerance. Being gay now doesn’t have the hardships it once did, and there is an element of nostalgia in Lovetown for those times. Personally, it’s hard to see how one could be terribly nostalgic, but then, soldiers like to reminisce about their worst battle experiences. And some of the vignettes are hilarious, like the perennial battles with the ladies who take care of the public toilets. Even the descriptions of old queens having sex with Russian soldiers are pretty funny, once you get past the ick-factor. Though Lovetown is a work of fiction, it is based on real stories and provides an invaluable view into a part of Poland very rarely seen. Full of sharp commentary on the Polish gay scene, and always witty, Lovetown is a necessary book for anyone who would like to learn more about contemporary Poland, and Bill Martin’s translation is a pleasure to read.