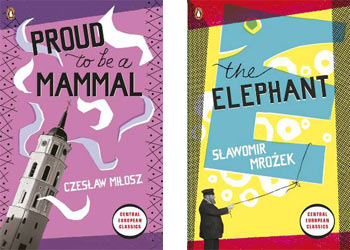 Penguin, the prestigious UK publishing house, has launched a new collection entitled Central European Classics. Ten tomes were launched this May, including volumes by celebrated Polish authors Czesław Miłosz and Sławomir Mroźek. Editor Simon Winder says that the seeds for the series were sown here in Krakow a year ago.

“I was talking to a Polish publisher who had known Czesław Miłosz and who berated me for the useless way in which Miłosz was published in English,” Winder reveals on the Penguin blog. “It was his essays which were so valued and admired in Poland and yet these were virtually unknown in Britain. Suitably shamed, I read lots of the essays and, indeed, they were amazing.”

Bookworms can now burrow into the fruits of Winder’s literary wanderings. Besides a collection of Miłosz essays called Proud To Be A Mammal, Polonophiles can enjoy The Elephant, a series of satirical short stories by master of the absurd, Sławomir Mroźek.

“I have always been obsessed with Central Europe so it didn’t take a huge leap of imagination to see that it might be possible to create a series which would allow readers to come to a range of great writers,” says Winder.

“The series could tell a story (from before the First World War to the last years of the Cold War), it could usefully highlight the switch from Soviet ‘Eastern Europe’ to modern ‘Central Europe’, and it could be made out of all kinds of writing – essays, novels, memoirs, philosophy, short stories.”