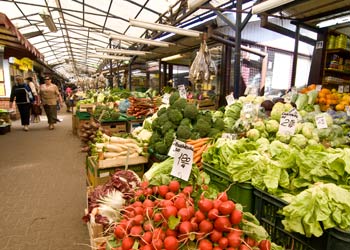 City street markets have been around for millennia. Created and supported by local governments as a way of providing citizens with fresh food at fair prices, they also allowed local farmers to earn a fair income. For some reason, in a country blessed with two million small farmers, it’s surprisingly difficult to get hold of produce direct from the producer in Krakow, and markets and traders seem to be treated as a necessary evil rather than providing a service and employment for locals and an attraction for tourists.

Krakow’s main markets are the 900-year-old Stary (Old) Kleparz (the best place for wild mushrooms in the autumn), the 90-year-old Nowy (New) Kleparz, Hala Targowa and Plac Nowy (get there by 7 am for cheeses and home-baked cakes, before the inspectors start work). A little further afield is the cavernous Plac Imbramowski, which has the biggest selection, probably as it’s the easiest for parking. However, the problem with each of them is that there is no selection of traders based on quality or origin of the produce, or even its edibility – they are open to anyone who is willing to pay the fees.

Even though each of Krakow’s street markets promotes itself as being the cheapest, this doesn’t mean that the quality of the food sold there is poor. If you can find the people who bring fruit, vegetables, eggs (not stamped and hence illegal according to EU rules!), milk and cream (usually unpasteurised and also illegal) from their own gardens and smallholdings, the quality and taste can be amazing. You just have to search for it among the air-freighted produce brought in from Krakow’s wholesale market in Rybitwy and the mountains of cheap pots and pans, clothing and gardening implements.

But increasingly, Polish shoppers are flocking to supermarkets and hypermarkets, with their plentiful parking and conveniently packaged, perfect-looking produce. The two biggest players are planning to invest huge sums to conquer the Polish market: Biedronka, with revenues of 16 billion złoty from its 1,500 shops and its rival, Tesco Polska, which raked in 10.5 billion złoty in 2009 from its 350 stores. Each is planning to invest around 1 billion złoty in the coming years and to open hundreds of smaller shops in the residential areas of Poland’s key cities. It’s not quite at the level of the UK, where £1 of every £7 spent in British shops is spent in Tesco. Not yet, anyway.

We can make a good guess what this will mean for Krakow’s street markets. The UK’s National Retail Planning Forum (which is financed by the supermarkets) carried out research that found that over 200 jobs are lost within 15 km of the opening of a large out-of-town store, and supermarkets make regular appearances in the news for stories on unfair contracts with farmers, price fixing and shoddy employment policies.

One ray of hope in countries facing the supermarket stranglehold is the growth of farmers’ markets. A farmers’ market is one that takes place regularly (usually weekly or monthly), where the people who make or grow the food are there in person to sell it. These markets are growing in popularity and numbers. There are over 600 in the UK (there were none in 1997) and New York City alone has over 100. Frequently dismissed as a place for posh people to shop, a growing number of studies have shown that this isn’t necessarily the case and that shoppers are willing to put up with the occasional price differences in return for the community aspect of shopping at these markets. Central and Eastern Europe is catching on. Prague, which has a population 50 percent larger than Krakow’s, started its first farmers’ market in April this year and was mobbed by 15,000 people. In Poland, Wrocław’s “Krótka Droga” bazaar started in 2009 and takes place every second Saturday at the Falanster Cafe. With 320,000 farmers in the Małopolska region, it’s time for Krakow to follow suit.