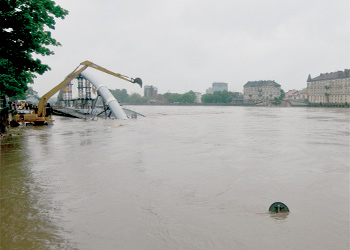 Poland and floods go together like vodka and bank holiday pileups. A cursory glance at the geography shows why: mountains with lots of precipitation at one end, the sea at the other and a flat bit with a broad, thousand-mile-long river in the middle. It would be hard to design a better playground for floods. Poland’s unfortunate history of invasion is nothing beside its history of inundation. It is no accident that the devastating Swedish incursion of the 17th century is known as the Deluge; the metaphor of a catastrophic flood laying waste to the land strikes an elephantine gong in the national consciousness. It is also no accident that the invading Swedes, and the retreating Nazis 400 years later, breached the Vistula’s embankments as a handy way of inflicting maximum damage on the country.

Poles have been battling floods for a thousand years. There are many fascinating books on the subject: Mikulski’s Catastrophic Floods in Poland (1955) or Girguś’ Six Hundred Years of Unusual Hydrological Phenomena (1965) are recommended diversions for the next time you find yourself sitting on a roof waiting for the helicopters. The fortifications deployed in this endless war, and the monuments to the furthest advances of the enemy, are numerous. Poland has some 4,700 km of protective embankments in the drainage basin of the Vistula alone. That’s almost the length of the Great Wall of China. Poles have been building them for a long time; the earliest record of their construction dates from 1270 — following, of course, a devastating flood. Flood boards, those signs and inscriptions recording past high-water marks, are to be found on bridges, churches and civic buildings throughout the land, some of them centuries old. The Church of St. Agnes in Krakow has a flood board dating from 1671. The Norbertine convent has a flood board that compares the water levels of the notorious 1813 flood with even greater deluges in 1593 and 1697.

The 1997 event is the one that stands out in living memory, or at least it did until last month. The bulk of that year’s chaos was along the Oder, with Wrocław its most spectacular victim, but records were set along the Vistula too. For Krakow it is the 1813 flood that is infamous. In August of that year the river rose up and swept away the Charles Bridge, which stood precisely where the new Podgórski Bridge will stand. This year’s flood came perilously close to wrecking its successor, which was caught with it pants down, half-constructed on the left bank. It also came within a few centimetres of inflicting intolerable stress on the slab side beam of Dębnicki Bridge. The terrible power of the river, capable of transforming from a glittering placid thing into a vast muddy-brown muscle overnight, is something a hundred generations of Poles have known.

Last month’s floods were bad, and a lot of people are still suffering from their effects, but there have been truly terrifying events in the past. The maximum water level in Krakow was around 8.5 m last month; in 1877 the waters topped a staggering 11 m in Korzeniewo near Gdańsk; there are seas shallower than that. A late spring melt in the mountains coupled with copious rain were the causes of this year’s deluge. It was a wet and miserable May, but there have been worse: in 1253, the annals tell us, it rained long and hard from Easter Sunday (20 April) until St. Jacob’s Day (25 July). In 1427 it rained from St. Bartholomew’s Day (24 August) until the first frosts of autumn, so let’s not count chickens quite yet.